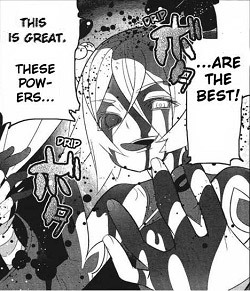 She seems to be enjoying it a bit too much…
"Power is intoxicating [...] and like any intoxicant, it's also addictive."
— Skulduggery, Skulduggery Pleasant
Advertisement:

For some, that is true in a very literal sense. When a character either gains superpowers (often coupled with Powers as Programs) or becomes more powerful they will feel pleasure sometimes expressed in a similar way to an orgasm.

The pleasure this power gives is usually expressed to phrases like "Yes! Yes! Yes!", "I can feel the power surging through my veins", "This feels so good," or similar, often in a very explicit way.

Whatever the case it is made clear that the person is really enjoying the pleasure his/her new powers give. Sometimes a side effect of this is that the person will have an addiction similar to drugs, which makes their "superpowers" similar to a G-Rated Drug. If they experience this with Psycho Serum, the two tropes merge.

This trope is mostly associated with villain characters as they are the more likely to express pleasure when gaining power and using it for hedonistic purposes than heroes. In contrast heroes are more likely expected to dislike their powers.