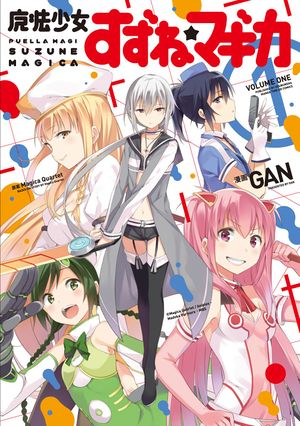 Puella Magi Suzune Magica is a Spin-Off Manga of Puella Magi Madoka Magica, which began after the Japanese premiere of the Rebellion movie. The manga was made by the pseudonymous GAN.note One of their previous series was a manga named Free! No, not that one. Its initial release was somewhat unusual; the first four chapters were released in trade paperback/tankobon format before it began serialization with the fifth chapter on November 22, 2013. It ran in the magazine Manga Time Kirara Forward until it ended a year later on November 22, 2014.

To everyone else, Suzune Amano appears to be an ordinary middle-school student. Of course, she's not ordinary. At day, she lives in and works at a newspaper delivery office, going about work and school with a smile; and at night, she patrols the city as a magical girl hunting witches and... assassinating magical girls?

Rumors and news reports of a serial killer are brought to the attention of four magical girls: Arisa Narumi, Chisato Shion, Haruka Kanade, and Matsuri Hinata. Recognizing that the culprit could be a witch, they head out to patrol the city... and become Suzune's next target. Can they protect themselves from Suzune? Will they be able to handle the truth that drives her actions?

The series has been licensed by Yen Press. Volume 1 is slated for release in September 2015, volume 2 in December 2015, and volume 3 is currently pending.

Suzune, Arisa and Chisato have been featured as part of the 2017 smartphone game Magia Record.