It is highly recommended that you at least read the first chapter/watch the first episode of School-Live! before continuing to read on for the full experience. Major spoilers are ahead. 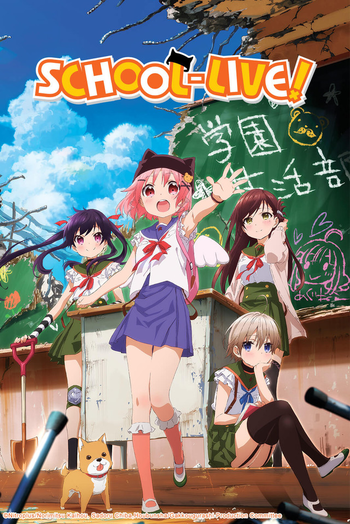 Yuki Takeya is in love with the school. For her, it's a wonderful place, where she enjoys her school activities, especially the activities of her club: School Life Club. The club has Rii-san as the president, Kurumi-chan as another member, and the teacher, Megu-nee, always there for them. Yes, she is in love with her school. What follows is the adventures of their club, as they live on the school grounds and mooch off from its services for as long as possible!

Except that is NOT the case.

The truth about the whole situation she and her friends are currently in is much less colorful and far bleaker than Yuki can ever imagine. In reality, the beautiful school she enjoys so much is in ruins, the School Life Club is more or less barricaded in a section of their school, and she and her friends are the only living people likely left in a city that is overrun with zombies. Despite this, her friends try to let Yuki live as close to a normal school life as they could manage, and through these efforts find it within themselves to live, and not merely exist day-by-day in the hellish situation they're in.

School-Live! (original Japanese title: Gakkou Gurashi!, meaning "Living at School!") is what you get when you make a most unlikely crossing of genres: Schoolgirl Series Slice of Life, and Zombie Apocalypse Survival Horror. Drawn by Chiba Sadoru and written by Kaihou Norimitsu of nitro+ fame, and serialized in Manga Time Kirara Forward from 2012 to 2020 (which serialized, among other series, Puella Magi Kazumi Magica and Dream Eater Merry), this story explores what exactly happens when the cute girls you'd normally find in the former get dumped into the setting of the latter.

An adaptation done by Lerche (the same studio that is responsible for Assassination Classroom) aired during the Summer 2015 Anime season and, with no one's surprise, the script writing is done by nitro+.

A live-action film adaptation was announced in the January 2018 issue of Manga Time Kirara Forward in November 2017 and was released in 2019.

A sequel epilogue series, School-Live! ~Letters~, focusing mainly on shorts of the girl's lives after the events of the main series started serializing bi-monthly June 24, 2020 to August 24, 2021.