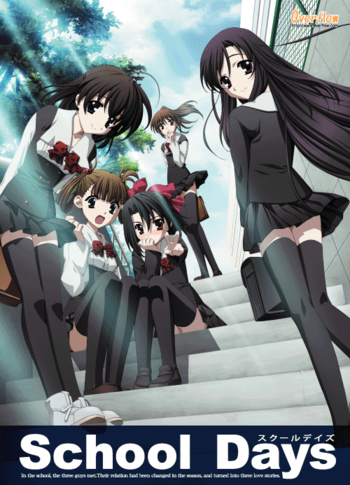 If only you saw the girl of your dreams in a train one day...
"If you keep the person you like on your cell-phone wallpaper for three weeks without anyone finding out, your feelings will be answered."
Advertisement:

School Days is, at first glance, a romantic comedy in which the male protagonist, Makoto Itou, falls in love with Kotonoha Katsura, a girl at his high school who happens to travel on the same train he does. Since he is shy about approaching her, he gets help from Sekai Saionji, his friend and classmate who turns out to be in love with him herself. Naturally, a love triangle ensues, testing the limits of everyone's feelings.

Although only a tiny fraction of the game's endings being such, this game is (in)famous for its violent "Bad Ends" (as well as its infamous anime series that famously subverted everyone who watched it without knowing what they were getting into). As is the case with every Visual Novel, the ending you get will depend exclusively on the decisions you take. This means that if you play fair; behave like a rational, decent, good person; and deal with every problem presented in the story with maturity, the game will reward you with a good, funny or even genuinely Heartwarming ending.

But make no mistake, if you go into this game thinking there won’t be consequences for being a complete ass, it will end bad for you. Brutally bad.

The Days series is a continuation from the Radish Trilogy, a series of game made by Overflow which established many plot elements about the Days characters' backgrounds, as well as a Spiritual Successor of Pure Mail with similar tone. The game was followed by two sequels.

edition of the game, School Days HQ, was released in English by JAST USA on June 28, 2012, and they have also obtained the license for Shiny Days which was released in a download edition on September 29, 2015. A limited edition physical release was released on October 7, 2015.

Note: All tropes related to the anime must go to its respective page. Same with the other games in the saga.