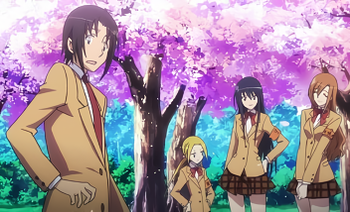 Until this year, Ousai Academy was an all girls' school. Takatoshi Tsuda, one of the first boys to go to the now co-ed school, finds himself confronted with Shino Amakusa, the student council president, because his tie isn't tight enough. In a short amount of time, he meets Suzu Hagimura, the treasurer, and Aria Shichijou, the secretary, finding himself roped in as vice president. According to Shino, a male perspective will help them along. As Takatoshi is about to find out, the student council, and the students of Ousai, are very very strange.

Based on a 2007-2021 yonkoma manga by Ujiie Tozen, Seitokai Yakuindomo (literally The Student Council Officers) was adapted into an anime in the summer of 2010 by GoHands. Multiple OVAs were released periodically. A second season called Seitokai Yakuindomo * note The asterisk is pronounced "bleep." Yes, it's for that. was aired for the Winter 2014 Anime season. A full theatrical movie was released on the 21st of July 2017 to celebrate the series' ten year anniversary. A second theatrical movie was announced for Summer 2020.

Think Student Council's Discretion in a gender role reversal with truckloads of perversion.