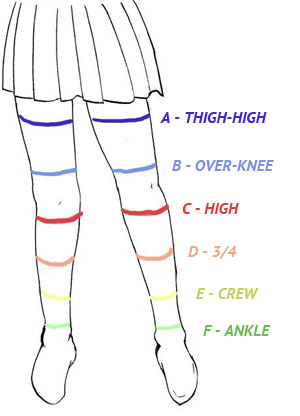 Not shown in exhibit A: the legendary Grade S.note As a rule, true Zettai Ryouiki includes over-the-knee (B) and thigh-high (A and S), but no lower.
"She's got a fetish for fine art
A pair of knee-socks and an oversized sweatshirt
She goes right to my heart
She comes a'knocking with her stocking and I get hurt."
— Ken Ashcorp, "Absolute Territory"

"Absolute Territory" (絶対領域, zettai ryouiki) describes the amount of bare thigh skin between the skirt and stockings or socks for female characters. The term comes from anime and manga and is used as an homage to the AT fields in Neon Genesis Evangelion.

Zettai Ryouiki is made up of three components: socks (or stockings), skin, and skirt.note The golden ratio for the ultimate zettai ryouiki is 4:1:2.5 (length of skirt : zettai ryouiki : length of socks above knee) and the acceptable margin for error is ±25%.For more info, check this article.

As per usual for fandom who obsess about costumes, this can be considered a moe attribute and thus, appear prominently in character designs and schoolgirl outfits, despite the fact that it kind of defeats the point of a uniform.

Since a Zettai Ryouiki is defined by the length of the stockings or socks, some people have categorized them into grades depending on the length of the socks. This ranking system goes from Grade F to Grade Anote Some even include a Grade S (Grade A + Tsundere + Girlish Pigtails), which started as an In-Joke based on Rin Tohsaka of Fate/stay night. However, only Grades A (and thus S) and B are considered Zettai Ryouiki.

It has gained popularity around the world, especially in Japan, where it is a very popular fashion item with girls and young women, so the occurrence of Zettai Ryouiki can be regarded as Truth in Television.

This not only covers socks but thigh-high boots as well. An Action Girl may trade the skirt for hotpants or other short bottomsnote However, it should not be too short like a leotard, or it'll mess the ratio, but if it doesn't include thigh-highs and visible skin, it's not Zettai Ryouiki.

See also Joshikousei (a combination of Japanese girls and the school uniform this is often combined with), Stocking Filler (for stockings without the skirts), Minidress of Power, and She's Got Legs. The core reason for this may also be tied to the Theiss Titillation Theory. Compare with Opera Gloves, which are the equivalents for arms. Contrast Proper Tights with a Skirt.