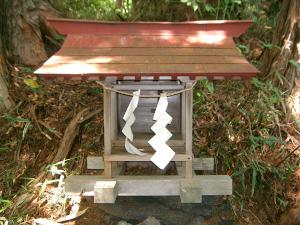 Shide are paper tassels with a zigzag shape, associated with Shinto. They are sometimes seen hanging from ropes, known as shimenawa, found at shrines or other sacred places, often trees or boulders. They are also found on haraegushi / ōnusa / gohei, wooden rods used in Shinto rituals. A gohei has two shide, whereas the other types have more than that. Also, some gohei are handheld (like the other types), whereas other larger ones are stationary standing features of shrines.

A rope hung with shide represents a boundary between the sacred and profane. When hung from a wooden rod, they are used for purification (oharai).

Not to be confused with a hataki (which is comparable to a Feather Duster) used for cleaning.