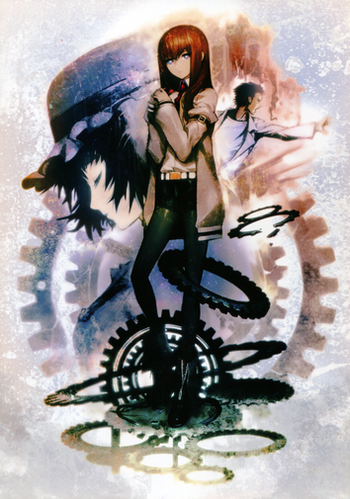 Time is a funny thing. The smallest stones can create the greatest ripples if thrown with enough force.
"The universe has a beginning, but it has no end. —Infinite.
Stars too have a beginning, but are by their own power destroyed. —Finite.
History teaches us that those who hold wisdom are often the most foolish.
The fish in the sea know not the land. If they too hold wisdom, they too will be destroyed.
It is more ridiculous for Man to exceed light speed than for fish to live ashore.
This may also be called God's final ultimatum to those who rebel."
Advertisement:

Being a Mad Scientist is awesome. Converting your microwave so that you can send e-mails to the past? Awesome. Being stalked by a secret organization doing their own Time Travel experiments and dead-set on capturing or eliminating you? Not so awesome.

Like many of his friends in the Akihabara district, Okabe Rintarou loves to tinker with different gadgets and inventions. However, he's taken this love so far as to declare himself a Mad Scientist who goes by the alias "Hououin Kyouma" and imagines himself fighting all manner of evil government conspiracies.

One fateful morning — July 28, 2010, to be precise — he and his ditzy childhood friend Shiina Mayuri are attending a lecture when they discover the dead body of Makise Kurisu, a celebrated researcher. As they flee the scene, Okabe sends a frantic text message to his Playful Hacker buddy Hashida "Daru" Itaru... and suddenly everyone around Okabe blinks out of existence, only to reappear a moment later.

Shortly thereafter, Okabe runs into a very-much-alive Kurisu, and Daru mentions a garbled text message he received one week earlier. Investigating further, the team of wannabe scientists discovers that by continuously modifying and upgrading their microwave, they've stumbled across the secret of Time Travel... or at least, the ability to send text messages back in time, which is a starting point, right?

Unfortunately, they're not the only ones interested in time travel. A shadowy French research organization called "SERN" has been running their own time-travel experiments, and after they catch wind of what Okabe has discovered, they begin to close in, sending in their agents, the Rounders, to acquire the machine. Soon, Okabe finds himself truly living his chuuni fantasy, and it is far worse than he could have ever imagined- he must evade the Rounders and their unknown leader, FB, while fixing his grave mistakes and finding a way to save those he loves from a universe that seems intent on killing them, no matter what.

The sequel to Chaos;Head and the second entry in the Science Adventure Series, Steins;Gate is set roughly one year after the events of the previous game. Instead of the "delusion trigger" system introduced in Chaos;Head, Steins;Gate uses the similar "phone trigger": whenever somebody calls Okabe, he can choose whether or not to answer. Text messages include blue hyperlinks that can be selected to reply to the text. The player's choices determine what sort of path the plot takes. Other than this though, Steins;Gate and Chaos;Head don't share any heavy direct connections, and the plot can be therefore easily be followed without having played Chaos;Head. (However, there are many references to Chaos;Head in terms of various character namedrops on what some of the cast from the previous game are up to during this time period, as well as a few recurring plot points and types of in universe fictional characters that are brought up in Steins;Gate, though these are likely to go completely over a blind readers' head.)

A 24-episode anime adaptation, animated by White Fox, aired starting in the Spring 2011 Anime season. Following the end of the anime's broadcast, a twenty-fifth episode was released straight to video and a theatrical film was announced. Funimation acquired the rights to the anime in 2011 and has dubbed it. The core 24 episodes are available for viewing on FUNimation's YouTube

. The movie has also been acquired by Funimation

Other tie-ins include the Epigraph of Closed Curve and Pandora of Eternal Recurrence light novels, which continue the story of the beta world line. These novels are accompanied by drama CDs.

A two-act stage play adaptation, Living ADV [Steins;Gate], ran from October 12 to 20, 2013, at the Zepp Diver City hall in Tokyo. While Act 1 is common across all runs, Act 2 varied by day (one VN ending per day); the full play (with the True Ending) can be watched with English subs here.

A full fan translation of the game exists, but much like the case was with Chaos;Head, the translators took down the patch when JAST expressed interest in localizing the game. While nothing has come so far from the original agreement with Chaos;Head, JAST finally announced a US release for Steins;Gate at Anime Expo 2013, and it was released on March 31, 2014. This version is still available on JAST's website, though Spike Chunsoft published their own version on September 9, 2016.

Robotics;Notes, the sequel to Steins;Gate, was released on the Xbox 360 and PS3 in June 2012. An anime adaptation began airing in the noitaminA block in October of the same year.

Steins;Gate: Load Region of Déjà vu made its theatrical debut in Japan on April 2013 and takes place one year after the series. The DVD/Blu-Ray was released in December 2013.

A sequel Light Novel, titled Steins;Gate: The Committee of Antimatter, had been announced

. It was scheduled for release in August of 2014, however, after several delays, in December of 2014, it was announced

that the project had been abandoned.

On June 5th, 2015, PQube released JAST's English translation of the visual novel on PS3, Vita and iOS in Europe. This was released in America on August 25, 2015.

The "true sequel", Steins;Gate 0, launched in December 2015, and follows younger versions of the cast. The release of the game was preceded by a re-broadcast of the anime, which ended with a special recut of Episode 23, dubbed Episode 23 Beta, with an alternate ending that ties into the game.

After nearly nine years in Japan, Steins;Gate: My Darling's Embrace was released on Steam on December 10th, 2019. Unlike the rest of the series, it's a romcom that allows Rintaro to date any of the girls (and Luka).

Compare and contrast Primer, for the time travel concepts. Also compare to Re:Zero, which takes a similar concept to a Dark Fantasy setting.

#-C
D-F
G-K
L-O
P-S
T-V
W-Y
A great love for someone, a great belief in something, a great desire to pass on something... If all those things surpass time itself and create "you", wouldn't that be wonderful?