The cast of Steins;Gate is not large. There are only the eight lab members, the Tennouji family that Okabe rents from and a few rarely appearing family members such as Luka's father. Names are in Japanese order (i.e. family name first, given name second).

WARNING: due to the spoilery nature of the series, All Spoilers Are Unmarked! 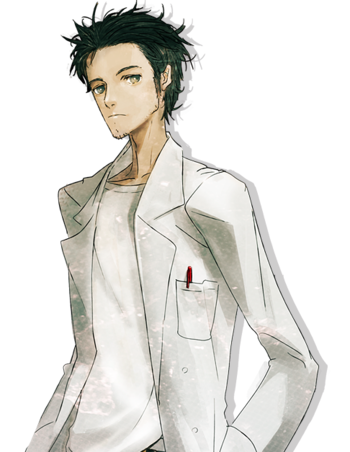 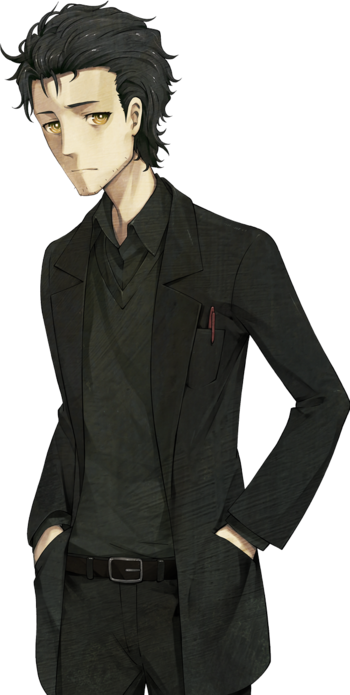 Lab member 001 and the protagonist, an 18-year-old first year college student and leader of the Future Gadget Laboratory. Around a decade ago, in order to help Mayuri through a difficult situation he began styling himself as "Hououin Kyouma", an evil mad scientist, exasperating others with his chuunibyou antics. Despite his goofiness, he's actually pretty intelligent and has an intuitive grasp of much of what they're doing. He retains his memories when the past changes with complete clarity, an ability he calls the Reading Steiner. 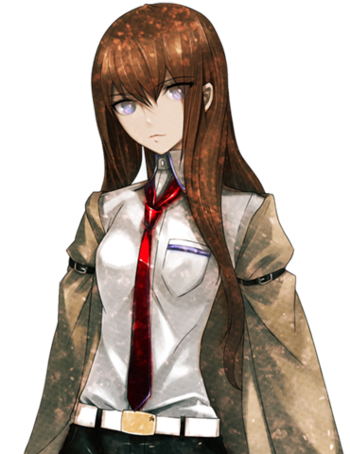 Kurisu is an 18-year-old Teen Genius apparently killed at the very beginning of the story, only to appear both alive and confused at Okabe's assertion that she's supposed to be dead. She becomes the fourth and final of the primary lab members and does a lot of the work on the time machine. Despite her excellent skills in physics, she's actually a neuroscientist. More than that, she's also a Closet Geek and noted to be quite the blatant Tsundere. 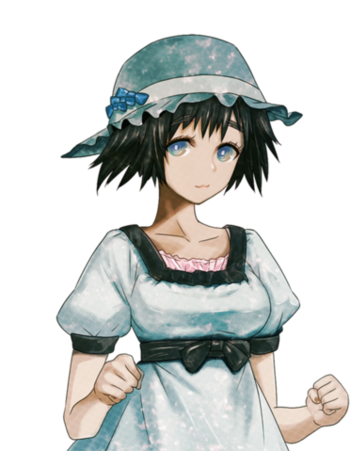 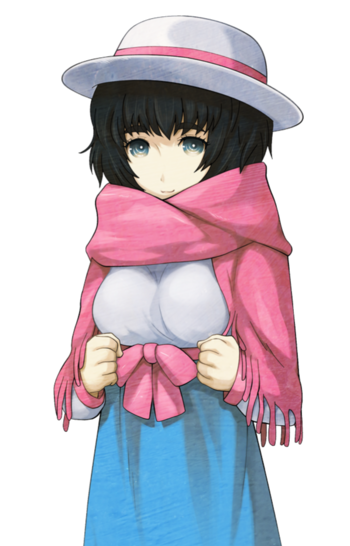 Labmem 002 and called Okabe's "Hostage" after a game he made to cheer her up, which is the foundation of his current Chuunibyou schtick. Though his childhood friend, she's two years younger and is still in high school, so he views her as a little sister and works hard to support and protect her. She's noted to be fairly useless as far as advanced physics go, but nobody minds since she makes sure everyone gets along. She works at the maid cafe May Queen with Faris and enjoys trying to make Luka wear the cosplay outfits she designs herself. 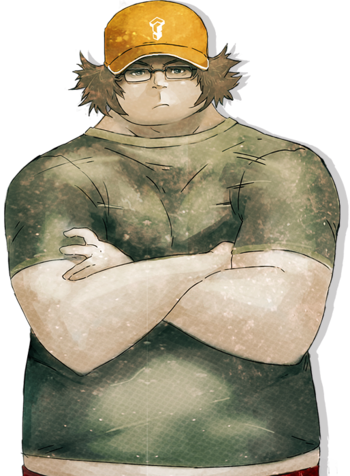 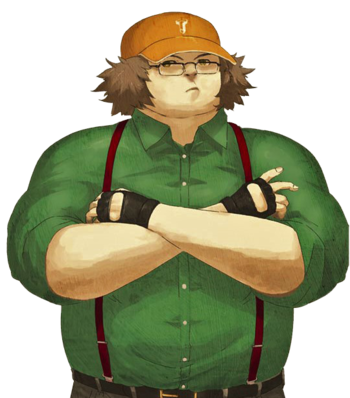 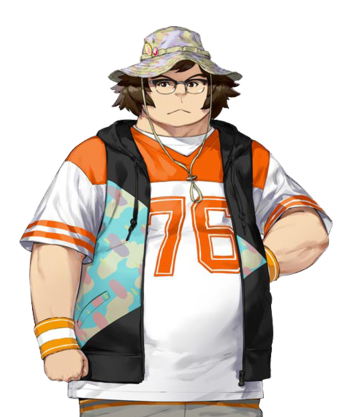 Labmem 003 and Okabe's best friend. He considers himself a Super Hacker and is an otaku with an unhealthy obsession with moe, but is almost as good at hacking as he claims and manages to access the SERN database. He has a crush of sorts on Faris, but he's not too serious about it. He doesn't get a lot of the advanced physics, but his skill with hacking and electronics more than make up for it.

He appears as a supporting character and namesake of the upcoming Robotics;Notes DaSH visual novel. 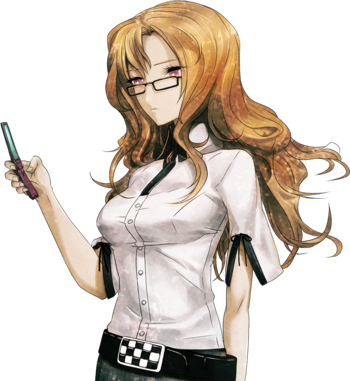 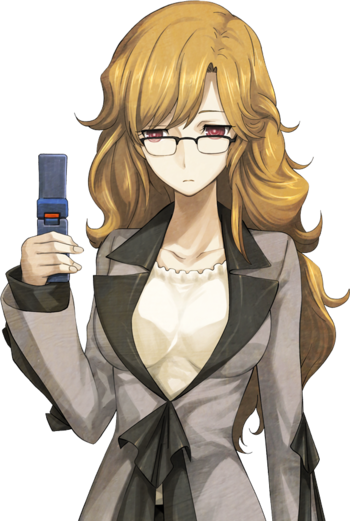 Moeka is a silent and inexpressive young woman who prefers to communicate through her cellphone. She's looking for the IBN 5100 and is the fifth person to join the lab after Okabe bumps into her taking photos for the newspaper she works at. If left to her own devices, she'll never speak, but will send dozens of gigantic text messages at a time until the receiver is forced to respond. She doesn't contribute to the time travel work, but she sends the first major timeline altering message to the past after she says she regrets her choice in cell phones and wants to redo it. 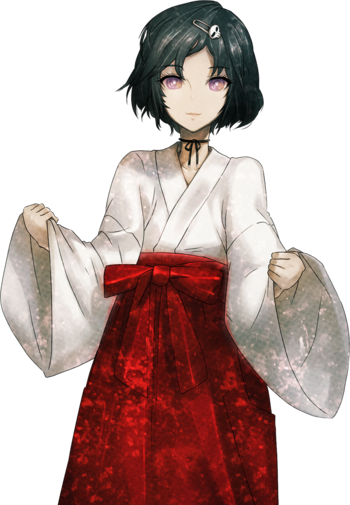 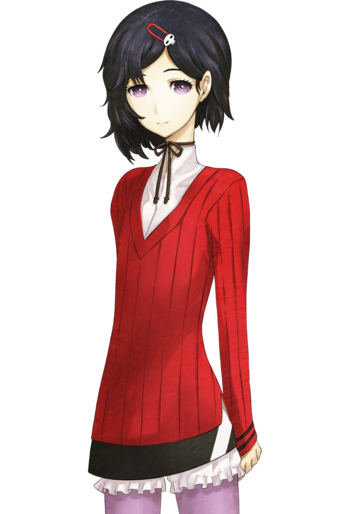 Luka is Mayuri's classmate, an extremely feminine looking boy who works at his family's shrine. He seems to worship Okabe, who believes they have a master/disciple relationship. He's very shy and soft spoken and before the story began was too nervous to ask to join the group, so he becomes the sixth member to join after Moeka and Kurisu have already joined. Like Moeka, he's allowed to send a message back to the past because he hopes he can use time travel to make himself be born as a girl. Somehow. 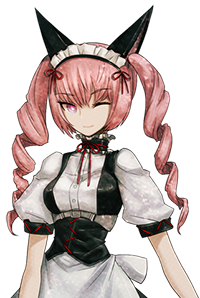 Faris is Mayuri's coworker at the May Queen Cafe as well as the owner. She's able to keep up with Okabe's fantasies because she seems to be living in one of her own. She always wears a pair of cat ears and does the typical 'nya' verbal tic even off duty. Likes to play with Okabe, but he finds her kind of annoying since she's better at making up weird melodramatic stories. She's secretly quite wealthy and becomes the seventh member to join the lab group. She keeps the content of her mail a secret. 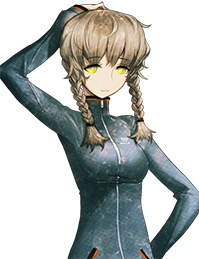 Amane is a teenaged girl who works at Mr. Braun's shop. She likes to ride her bicycle and gets along very well with his daughter Nae. She's very physically fit and a friendly person, but her rather strange vocabulary can be difficult to deal with. She has an instant antipathy towards Kurisu, but is still the eighth and final member to join the lab. She doesn't send a message to the past, but Okabe sends one on her behalf. 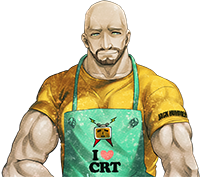 A CRT-TV store owner, and Okabe's landlord. Though a large, imposing man, Yuugo is a doting father towards Nae and wishes to shield her from Okabe's... eccentric activities. He is referred to as Mr. Braun due to his love of braun tubes. Though gruff, he rather likes Okabe.

Yuugo's daughter who is good friends with Mayuri. She appears to be slightly afraid of both Okabe and Daru, but gets along well with everyone else.

A mysterious poster who appeared on @chan. While he says the same things as the John Titor in the real world, nobody remembers the first appearance of Titor and he claims himself that he has not been to the year 2000, though he may go in the future. He's an early source for information, though Okabe is understandably leery about trusting him.

FB is the operative in charge of local SERN's rounders in the area. A mysterious character for most of the story, who communicates only by cell phone texts. See Yuugo Tennouji/Mister Braun for more details. 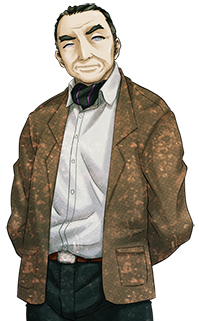 Doctor Nakabachi is a crackpot physicist obsessed with time travel. He is not taken seriously in the scientific community. The story begins with Okabe attending his conference simply to make fun of him for attempting to publish internet conspiracy theories about time travel as though they were true. In reality however, he is actually Shouichi Makise, Kurisu's own father. 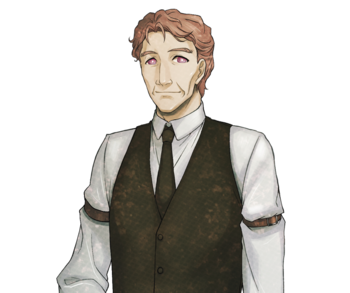 Voiced by: Taira Kikumoto (JP), Eric Vale (EN)
The father of Faris NyanNyan/Akiha Rumiho, who passed away years before the start of the series. He was close friends with Dr. Nakabachi in their youths and was entrusted the IBN 5100 to by an elderly Suzuha before donating it to the Urushibara family shrine.
Imamiya Tsuzuri 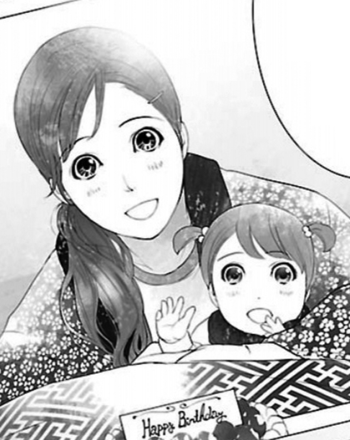 Tsuzuri and a young Nae

Tsuzuri is Tennouji Yuugo's late wife and mother to his daughter Nae. She first met a younger Yuugo in his early Rounder days when he stopped a thief from running away with her bag and, despite knowing full well the nature of his work, still opened her heart and eventually settled down with him. She was killed by SERN as a punishment for her husband, who went against his orders in order to protect an elderly Suzuha, and was jellified in one of their experiments while pregnant with their second child.

Urushibara Eisuke
Voiced by: Mitsuaki Hoshino (JP), Robert McCollum (EN)
Eisuke is the head priest of the Yanagibayashi shrine and father of Luka. Together with his son, he plays a side but important role in both the original visual novel and 0, usually as the host or retainer for the current game's MacGuffin.
4℃/Shido
Voiced by: Minoru Shiraishi (JP), Ian Sinclair (EN)

The leader of the Viral Attackers and a recurring minor antagonist. He uses his gang to win Rai-net games through underhanded means, and terrorizes his opponents. He becomes an enemy of Okabe when the latter helps Fairs challenge him at the Rai-Net tournament. He reappears in Linear Bounded Phenogram as the antagonist of Okabe's chapters.

Rebellion of the Missing Ring Characters 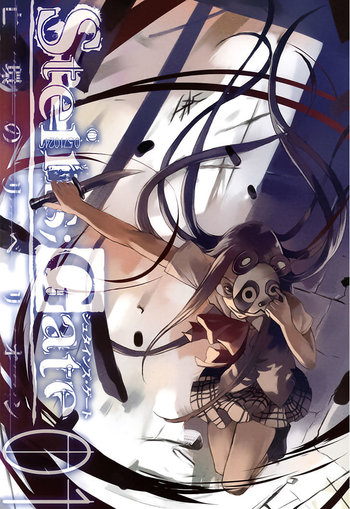 A Rounder from the SERN-controlled future and the main antagonist of the spin-off manga Rebellion of the Missing Ring. She has the mission of chasing down Suzuha, and will capture her by any means necessary. 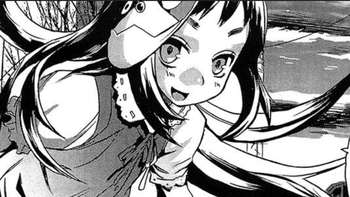 The sister of Kayano who was kidnapped by Rounders to become their Sex Slave. This drove Kayano down her path of villainy.