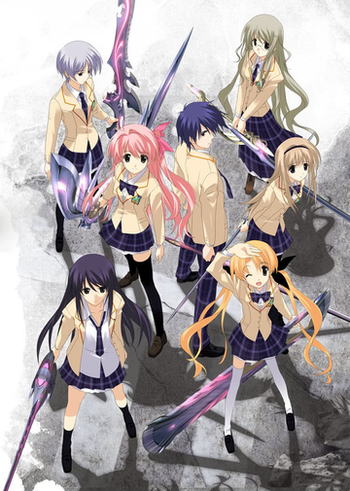 Whose eyes are those eyes?
"If you were God and your delusions became reality.
What kind of delusions would you imagine?
A sensual world? A despotic society?
Destructive sanctions?
Or..."
Advertisement:

Chaos;Head is a Visual Novel and the first entry in the Science Adventure Series. It stars Takumi Nishijou, an Ordinary High-School Student and raging otaku who lives in the Tokyo ward of Shibuya.

Takumi lives in a steel shipping container on the roof of a building, converted into a small apartment. He spends most of his time at home, either playing the fictional MMORPG Empire Sweeper Online (in which he is Neidhardt, the most famous and powerful player ever) or watching anime. He has over one hundred "waifus" (figurines), his favorite being the character Seira from the fictional anime Blood Tune; he frequently affirms his love of 2-D women and his hatred of 3-D women. He is a borderline hikikomori, having crafted a "minimum attendance shift chart" to ensure that he can attend school as little as possible while still graduating.

When the story begins, he is only known to have even semi-regular interactions with a few people: his bratty younger sister Nanami, his ESO guild partner Grim (whom he speaks to online), the school's resident playboy Misumi, and Seira, whom he has become deluded into thinking exists, to the point that he can hear her talking and interact with her as a kind of muse. Beyond these, he seems to be quite afraid of interacting with people, exhibiting classic signs of social phobia (such as extreme discomfort with making eye contact).

This routine life is shattered when, upon coming home one day, he hears the sound of something being pounded into concrete. Looking over, he sees a pink-haired 'demon girl', pinning a body to an alley wall with cross-shaped stakes. The girl turns, smiles, and inexplicably calls him by name, at which point he runs. This scene is the third in a series of bizarre, gruesome murders called the "New Generation" murders. Takumi initially wants nothing to do with this, but a mysterious user known as 'Shogun' begins stalking Takumi, and seems intent on dragging him into the whole mess. Takumi then realizes that this mysterious man is working with the demon girl. Meanwhile, the Noah OrganiZation Of Medical Instruments, or the NOZOMI Group, puppeteers the New Gen incidents for their hidden, sinister purposes. When the bodies continue to pile up, a whole bunch of weird super-powered girls show up and get closer to Takumi, a conspiracy between NOZOMI and several powerful organizations surfaces, and, in the center of it all, Shogun and the Demon Girl make their move, Takumi finds himself forced out of his solitary lifestyle, and into a mystery encapsulating all of Shibuya.

The game has a unique "delusion trigger" system where the player can, at certain points, opt to view one of Takumi's daydreams/delusions. The player is given a choice between a good delusion (happy, humorous, or H in nature) or a bad delusion (paranoid, violent or tragic in nature). For example, when Nanami visits and berates Takumi for not ever calling home, she takes a swig of soda without asking; the good delusion brings up the concept of an Indirect Kiss, prompting Takumi to compare it to a hentai game scene (at which point it almost does turn into one), and the bad delusion involves Nanami taking a swig of coke, then gagging and coughing up blood and dying. Takumi wonders why that happened, then remembers that he poisoned the coke beforehand. Typically these delusions have no direct influence on the story itself (Takumi simply snaps out of it and the scene continues from where it left off), but seeing certain ones triggers flags that can influence which ending you see. Many of these delusions involve blatant reference to anime (or eroge) tropes, as well as surprisingly clever foreshadowing.

The game was made into an anime by Madhouse for the fall 2008 season, with an Xbox 360 updated rerelease titled Chaos;Head NoAH released in February 2009.

A fan translation patch for the game exists, but was taken down from the main site due to an agreement with Nitroplus, which unfortunately led to Development Hell as there's no localized version of the game yet, in fact no news after the "agreement" between the original fan translators and Nitroplus were given.

That being said, a current fan translation by Committee of Zero, a group dedicated to translating Science Adventure content that never came to the west, is currently working on translating the Chaos;Head NoAH version of the game as it is the canon entry that future titles rely on story wise.

In February 2022, the official twitter account for the Science Adventure series posted a tweet hinting towards an official English release, and shortly after dropped a trailer announcing the first ever official Western release of the game to be released in October.

The game is the predecessor to Steins;Gate and Robotics;Notes.

A Sequel, Chaos;Child, was released for the Xbox One in 2014, with different cast of characters in the same setting of Shibuya set several years after the events of Chaos;Head. The anime adaptation