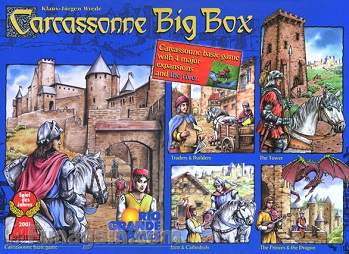 The Big Box: the main game and the first four of many expansions.
Advertisement:

Tile-based boardgame (and its numerous sequels) in which players compete to control and complete cities, roads, and fields. Part of the Euro Game genre.

It takes place in the southern France medieval city of Carcassonne

, with each player representing the land developers responsible for the city's famous fortified architecture and layout.

The gameplay has players drawing tiles with roads, cities, fields, and farms on them, and placing them on the table to match other tiles. When a player places a tile, they can put one of their "meeples" (small wooden pieces representing workers) on one of its features. When a given feature is completed (trails having two endpoints, cities being completely enclosed, etc.), the player with a meeple on it scores points and retrieves their meeple. The game ends when every tile has been placed, and the player with the most points is the winner.

A number of video game versions also exist, including versions for PC by Deep Silver, iOS devices by The Coding Monkeys, the Xbox 360 by Sierra Studios, and the Nintendo Switch by Asmodee Digital.

This Euro Game provides examples of the following tropes: