Western Animation / The Buford Files and the Galloping Ghost 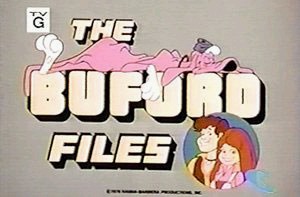 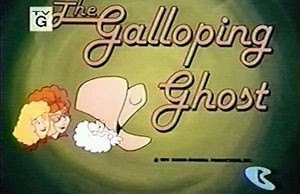 A Saturday Morning Cartoon produced by Hanna-Barbera, originally airing as separate quarter hour shorts in Yogi's Space Race on NBC. When Yogi's Space Race was canceled, the segments were aired for 15 minutes each. The Buford Files aired first, followed by The Galloping Ghost.
Advertisement:

Buford (Frank Welker) is a smart but sleepy bloodhound, living deep in the murky swamp country of Fenokee, who teams up with two teenage humans, Cindy Mae and her older brother, Woody. The trio solves mysteries that baffle Sheriff Muletrain Pettigree and his overeager yet dimwitted deputy, Goofer McGee. Buford's abilities are expanded with ears that revolve like radar dishes, and his nose responds to clues like a Geiger counter. he also howls his heart out when the moon comes out and has a running feud with a brown raccoon.

Nugget Nose (Frank Welker) is a short and feisty ghost prospector who finds adventure riding his invisible horse. He is also a guardian to Wendy and Rita, two cowgirls working at the Fuddy Dude Ranch, whose owner is grouchy old Fenwick Fuddy. Nugget is always battling Fuddy and takes delight in harassing him in odd and humorous ways. Whenever the girls are in trouble, Wendy summons Nugget Nose by rubbing her special nugget necklace.