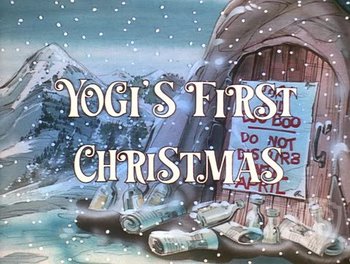 Exactly What It Says on the Tin: This feature-length Christmas Special, produced by Hanna-Barbera and first aired in syndication in 1980, details the first time that Yogi Bear ever celebrated Christmas.

Christmastime has come to Jellystone Park and while Yogi and his buddy, Boo-Boo, hibernate through it, as they do every winter, a group of their friends (made up of Huckleberry Hound, Snagglepuss, Augie Doggie and Doggie Daddy) are brought in by Ranger Smith to spend the annual Christmas Carnival at the Jellystone Lodge. However, upon arrival the group find out that this may be the last Christmas they celebrate in the lodge when the manager, Mr. Dingwell, tells them that because of a series of strange occurrences last year, business is virtually nonexistent and the owner of the lodge, Sophie Throckmorton, is likely to sell it so a freeway can be built. A chance at saving the lodge does appear when the gang are informed that Mrs. Throckmorton is coming to stay for the Christmas Carnival and if she enjoys herself she may not sell the lodge.

The group's ensuing revelry manages to wake up Yogi and Boo-Boo from their hibernation, and upon finding out that it's time for Christmas, they decide to stay awake to celebrate. Ranger Smith, fearing that Yogi's antics could ruin efforts to save the lodge, refuses to allow the bears to stay, and chases them down to force them back to their cave. During that time, Yogi saves Mrs. Throckmorton and her bratty nephew, Snively, from an avalanche caused by Herman the Hermit, a Christmas-hating villain character who wants nothing more than to ruin the Christmas Carnival. This act of heroism endears Yogi to Mrs. Throckmorton and keeps Ranger Smith from forcing Yogi back to his cave for risk of upsetting her. So begin Yogi's efforts to celebrate Christmas, but with Herman's sabotage, Snively's pranks, Ranger Smith's eager desire to get rid of him should trouble arise, and his own instincts, will Yogi be able to make it to Christmas?

After years of syndication on Cartoon Network and Boomerang, the film saw physical release through the manufactured-on-demamd Warner Archive Collection, which shifted into HBO Max.