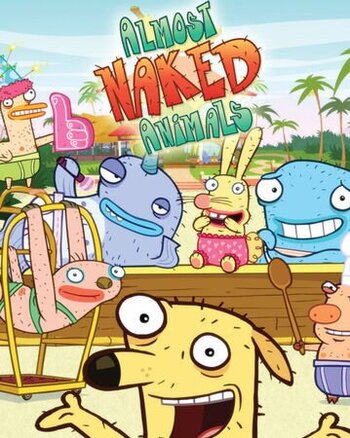 At the beginning of the 2010s, small-time American illustrator Noah Z. Jones happened upon a minor miracle of the animation industry: working on two different cartoons produced in two different countries within the same timeframe and having his name attached as creator for both. Out of these curious events came the 2010 underwater teen sitcom parody Fish Hooks, which was produced by Disney Television Animation in the United States, and this oddball series, which was produced by 9 Story Media Group in Canada.

Almost Naked Animals centers on a hotel called the Banana Cabana populated by... well, just read the show's title — crudely shaved animals wearing nothing but their underwear. The cabana is managed by a cheerful but dimwitted dog named Howie and his ragtag bunch of misfit friends, including his fearful best buddy Octo (an octopus), as well as Bunny, Duck, Piggy, Narwhal, and Sloth (no prizes for figuring out any of their species). Minor villainy comes up through Howie's mean older sister Poodle, the owner of a much swankier competing hotel named the Chateau Chattoo, who seeks to drive Howie out of business and buy his hotel, with the help of her henchman Batty.

Almost Naked Animals debuted on the Canadian kids' network YTV on January 7, 2011, and later came to Cartoon Network in the United States on June 13, 2011 alongside fellow YTV series Sidekick as part of a general trend of Canadian imports having prominence on CN at the time. It ran for 3 seasons and 52 episodes, concluding on May 22, 2013.

Not to Be Confused with the trope Half-Dressed Cartoon Animal.