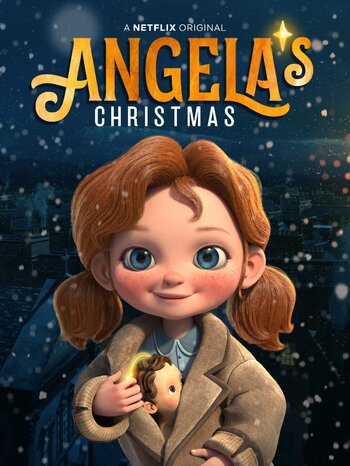 Angela's Christmas is a 2017 Irish-Canadian animated film directed and written by Damien O'Connor, co-written by Will Collins, and distributed by Netflix. The film is an adaptation of the children's book, Angela and the Baby Jesus, written by Frank McCourt, who was best known for writing the 1996 Pulitzer Prize-winning memoir, Angela's Ashes.

The story is set in Limerick, Ireland, in 1914 on a dark, snowy Christmas Eve. During a visit to the local church with her family, the Sheehans, Angela (Lucy O'Connell) notices a naked baby Jesus statue and feels sorry for it. Taking the opportunity on a cold, dark night, Angela proceeds to steal the statue and look after it as a material figure, thinking that by doing so, she may be able to provide everyone in Limerick, her family included a great Christmas Day later on.

A sequel was released in 2020, titled Angela's Christmas Wish, which takes place a year after the events of the first film. It centers on Angela anticipating Christmas Eve and, upon hearing of her mother making plans for a surprise regarding the festivity. Taking a note from this, Angela and Pat decide to enact their own Christmas surprise, which is to go to Australia and reunite with their father, who had left them two years ago. Their plans eventually lead them to encounter a girl named Dorothy, who promises to help Angela and Pat find their father whilst also asking her father that, if the Sheehans are successful, her father can provide veterinarian help for Mr. McGinty, as one of his cows is due to give birth on Christmas Eve.

Angela's Christmas and its Sequel Provides the Following Tropes: