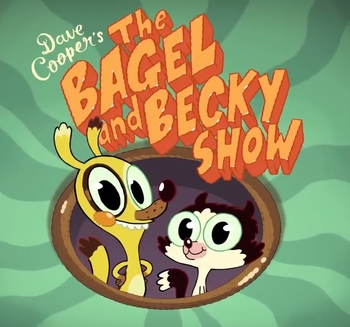 The Bagel and Becky Show (sometimes just called Bagel and Becky) is a wacky but short-lived Canadian cartoon produced by Radical Sheep Productions (The Big Comfy Couch, Fangbone!) in association with Jam Filled Entertainmentnote although both studios are divisions of Boat Rocker Media. Created by Canadian artist Dave Cooper (also known for creating Nickelodeon's 2015 series Pig Goat Banana Cricket), the series is the Animated Adaptation of a children's storybook called Bagel's Lucky Hat that Cooper himself wrote under the Pen Name of Hector Mumbly. The show only ran for a single season of 26 episodes on Teletoon from November 2016 to March 2017, with production on the series being funded by Teletoon and BBC Worldwide.

The show follows the eponymous Brother–Sister Team, who are an energetic and dimwitted dog named Bagel and an intelligent and cautious cat named Becky (voiced by Canadian comedians Kevin McDonald and Nikki Payne respectively). Every day after one of their (human) mom's delicious pancake breakfasts, the two go outside for adventures in their neighborhood of Awkward Hills, where they're joined by their neurotic friend, Percy the Pigeon, and encounter the various equally eccentric denizens of the town, including their gopher and squirrel rivals Loaf and Lisa, the malevolent but poorly-disguised extraterrestrial mayor Torgo, elderly robotic mad scientist Old Man Jenkinsbot, and the greedy explorer duo Argentina and Phillipe. But whatever kind of hijinks Bagel and Becky get into, it can always be guaranteed that bizarre happenings and deranged shenanigans that can only be seen to be believed are bound to ensue.

The Bagel And Becky Show contains examples of:

The Bagel and Becky Show

The Bagel and Becky Show