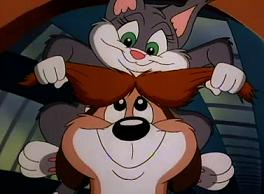 You can tell she's female because she has visible eyelashes.
Pierce: He thinks all dogs are boys and all cats are girls.
Troy: There's no way to disprove that. Have you ever seen a cat penis?
— Community, "Anthropology 101"
Advertisement:

Often their owners will be the same sex as the animals. Ergo, women will be cat people and men will be dog people.

Even if they're not contrasted with another species of animal, strangers will tend to assume by default that dogs are male — especially large or intimidating breeds — and cats are female. So widespread is this trope that a common misconception among children is that all dogs are male and that all cats are female.

This trope could be due to the way dog's bodies are shaped and the way cats' bodies are shaped. Dogs' bodies have big chests and small bellies and they tend to look more muscular. Cats' bodies have small chests and they look rounder and curvier. Dog faces also tend to be either blocker or narrower and more angular (giving them a sharper, "rugged" look), while cats usually have more delicate features (making them look "prettier"). Another feature playing part is this trope is the sounds they make: dogs growl and bark in a deep, masculine voice, whereas cats make high-pitched, thus feminine "meow" sounds. Cats tend to be much more elegant and graceful in their mannerisms than dogs, furthering the perception of femininity.

Large wild cats are less likely to fall into this trope than domestic cats are since they are seen as powerful and aggressive and therefore masculine. Similarly, certain breeds of dogs, mostly small or showy ones like Chihuahuas or poodles, as well as foxes, are frequently depicted as female or being owned by women due to their association with fashion and beauty.

An Animal Stereotype. See also Cat Girl and Gender Equals Breed. Often a case of Huge Guy, Tiny Girl. Subtrope of Species Equals Gender and Cat/Dog Dichotomy. Compare to Men Like Dogs, Women Like Cats for another way gender stereotypes are used when it comes to dogs and cats.