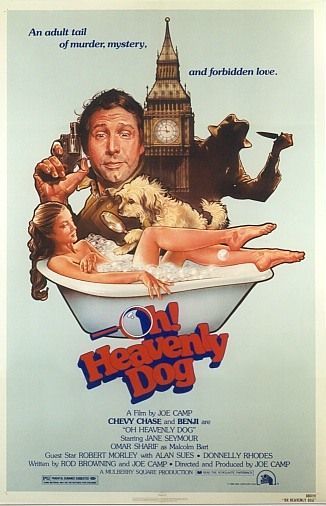 Oh! Heavenly Dog is the movie where Benji and Chevy Chase play the same character. It costars Jane Seymour and Omar Sharif.

Benjamin Browning (Chase), a private investigator living in London, accepts the assignment of acting as a bodyguard for a woman. However, when he arrives at her residence, he discovers the woman had been stabbed to death, before her attacker also fatally stabs Benjamin. In the afterlife, Benjamin is informed that, before he can enter heaven or hell, he must complete an assignment that requires him to return to life to solve his own murder, but, much to his chagrin, he will return to life in a dog's body (specifically Benji's). Benjamin then discovers that the man who hired him in the first place (Sharif) may be behind the murder, as he searches for his killer with the help of a woman he met on the street before his fatal assignment, Jackie Howard (Seymour).