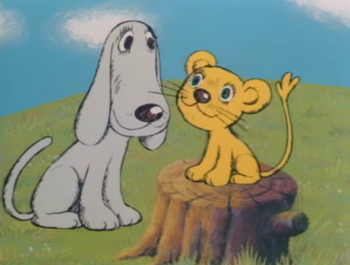 The Kindly Lion (やさしいライオン, "Yasashii Lion") or The Gentle Lion is a 1970 Japanese animated short film by Mushi Productions (now known as Tezuka Productions) directed by Takashi Yanase with Osamu Tezuka as executive producer. It's an animated adaptation of the Japanese children's book of the same name by Takashi Yanase (creator of the Anpanman franchise) from the mid to late 1960s.

The original book and film are centered on a parental relationship between two completely different species (a lion and dog, respectively). Buru-buru is an orphaned lion cub who lost his parents at an unknown period at a zoo, while Muku-muku is a female dog who lost her puppies moments after birth. After a female rabbit discovers Buru-buru malnourished, she quickly takes him to a heartbroken Muku-muku and convinces her to adopt him. As the short progresses, the story suddenly takes a somber turn.

The short consists of two narrators (a female narrator and a child voiced by Minori Matsushima, who is heard asking questions to the female narrator and showing concern for the characters) and uses songs written by Takashi Yanase and performed by the Japanese music group "100s" to progress the story. The short even received its own book adaptation which uses white and green colors compared to the original version.

The original book and short film would become one of Takashi Yanase's most beloved works (along with Chirin no Suzu) and is fondly remembered by Japanese audiences. An English translation can be viewed here

alongside a reading of the original book.

In later editions, a song sheet was added

This short is also the first animated adaptation of Yanase's works, with future adaptations moving to Sanrio Animation, where they made two animated shorts (Little Jumbo and The Rose Flower and Joe) in 1977. They made a feature film adaptation of Chirin no Suzu (known as Ringing Bell in the west) in Spring 1978 and a comic adaptation that was released to Sanrio's defunct magazine Lyrica in June 1977.

called "Takashi Yanase Works- (Musical Fantasy) From "Yasashii Lion"/"Nursery Rhyme from 0 to 99" was released in Japan with a song that adapted the song. Alongside other songs based on Japanese Nursery Rhymes, Poem, and Lullabies for children.

The Kindly Lion provides examples of::