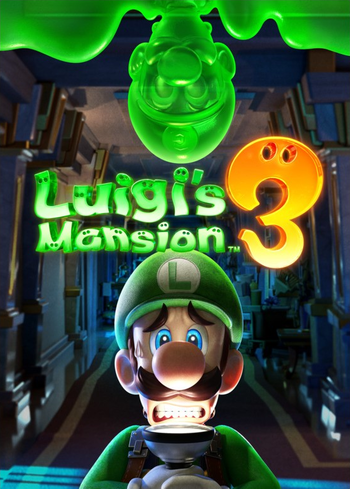 Come and stay at the Last Resort. You may never lea- er, want to leave.
Luigi's Mansion 3 is a third-person adventure game developed by Next Level Games for Nintendo Switch. The third entry in the Luigi's Mansion series, the game released on October 31, 2019, on Halloween.
Advertisement:

Luigi has received an invitation to go on vacation in the Last Resort, a luxurious hotel. Naturally, he jumps at the opportunity and brings along his brother Mario, Princess Peach, and 3 Toads, with the Polterpup from the previous game tagging along as well. Unsurprisingly, it turns out to be a haunted hotel and a trap set by King Boo and the owner of the hotel, Hellen Gravely, to capture Mario and company. With the help of E. Gadd, the new Poltergust G-00, and even Gooigi, Luigi must once again conquer his fears and rescue everyone. But it won't be easy...

After the mission-based structure of Dark Moon, this game returns to the more open-ended style of the GameCube original. Luigi must explore each themed floor of the hotel while fighting ghosts, solving puzzles, and defeating bosses to obtain elevator buttons that he can use to reach more floors, meeting a strange cast of ghosts along the way. The Poltergust G-00 gives Luigi several more tools to play with, such as Suction Shot plungers, and he can now summon Gooigi to reach new areas and provide extra firepower. The ScareScraper multiplayer mode returns from Dark Moon, now supporting up to eight players at once.

Tropes found in Luigi's Mansion 3 include: