Series / Lomax, the Hound of Music 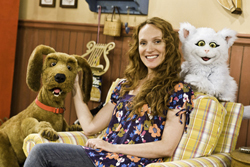 Lomax, the Hound of Music is a PBS Kids children's TV series from 2008. It was inspired by the First Steps in Music musical curriculum created by John Feierabend.
Advertisement:

This series takes place on a train known as the Melody Hound Express. A music-loving dog named Lomax, a cat named Delta, and a woman named Amy travel throughout the United States on this train, searching for music of all genres and styles.

Lomax, the Hound of Music contains the following tropes: