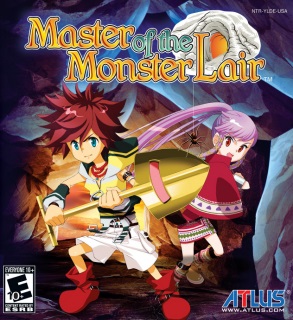 The Masters of the Monster Lair! ...and their talking shovel.
Advertisement:

Master of the Monster Lair is an Eastern RPG for the Nintendo DS made by Global A Entertainment and published by Atlus in 2008.

Owen is a young boy from the sleepy town of South Arc. The Mayor is dismayed by his town's lack of exciting tourist attractions, so he gets a really bright idea - get someone (Owen) to build a dungeon in the nearby cave to attract monsters. Upon discovering a talking magic shovel, Owen is given the daunting task by the Mayor of transforming the town's only cave into something a hero would be proud of.

As the aspiring eponymous Master of the Monster Lair, Owen must use his shovel to dig holes in the dungeon and create rooms for monsters to spawn in so that Owen (and presumably other future heroes) can fight them.

Master of the Monster Lair provides examples of: