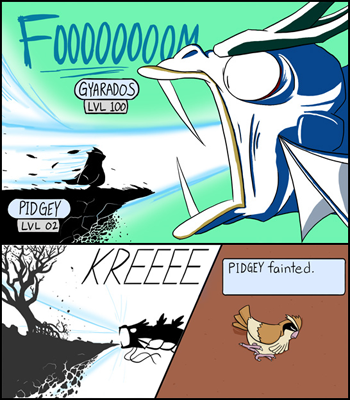 "I was really careful in making monsters faint rather than die. I think that young people playing games have an abnormal concept about dying. They start to lose and say, 'I'm dying.' It's not right for kids to think about a concept of death that way. They need to treat death with more respect."
— Satoshi Tajiri, regarding this trope in Pokémon
Advertisement:

Even though opponents are commonly described as being "killed", monsters usually inexplicably disappear after being defeated rather than leave corpses. Similarly, no one in your party really dies except if the plot calls for it. When your HP runs to zero, you're just knocked out, provided there's other party members still conscious to carry you away or heal you. (The monsters will eat you at their leisure if you are all knocked out.) Some games may even bump such characters back up to 1 HP once the battle is over. This only comes to play when a supposed permanently lethal attack/beat down/curb stomp/smack down/bullet storm/application of lethal force only causes someone to get KO'd or otherwise easily revived.

This might be to soften the idea you're basically going around killing wildlife, which could get morally sketchy in some places. It could also be so that when one of the characters dies because of the plot, one isn't distracted by questions like "Why don't they just use a Phoenix Down?"

This game mechanic is sometimes complemented with following mechanics:

See also Tap on the Head, Only Mostly Dead, Nobody Can Die, Death Is Cheap, and Permadeath. Compare Set Swords to "Stun". Though 'fainting' is sometimes used to describe a Non-Lethal KO, this should not be confused with Fainting.