Spoilers for Valkyria Chronicles will be left unmarked. You Have Been Warned! 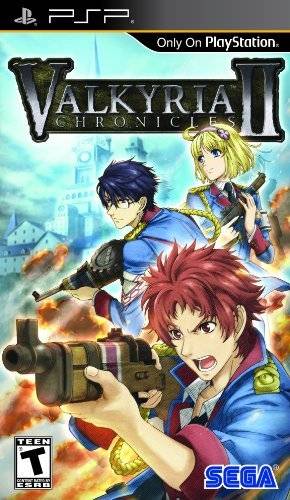 Its story takes place in EC 1937, two years after Valkyria Chronicles. The Principality of Gallia was able to repel a massive invasion by the Imperial Alliance, but at great cost to its infrastructure and military. While the Second Europan War rages on beyond its borders, Gallia struggles to rebuild itself.

The revelation that the ruling house of Gallia was actually a Darcsen bloodline has sent shockwaves throughout the nation. A civil war has erupted as several anti-Darscen nobles unite under the banner of Count Gilbert Gassenarl and form the Gallian Revolutionary Army (colloquially known as "the Rebels") to purge Darcsen influence from Gallia. As the law of Universal Conscription forbids deployment of the Militia against internal strife, the government of Gallia is forced to deploy cadets from the prestigious Lanseal Royal Military Academy to help quell the Rebel threat.

One of these students is seventeen-year-old Avan Hardins, a Hot-Blooded but Book Dumb cadet who enrolled to discover the truth of what happened to his elder brother Leon, an ace student who supposedly died on a top-secret mission. Placed into "Class G", the dumping ground for Lanseal's underachievers and eccentrics, Avan is swept up into what will become known as the Gallian Civil War and must fight not only for the sake of his team-mates, but for the country as a whole.

Gameplay-wise, the meat of the improvements are in the pre-battle arrangements. Individual characters can now be changed into a variety of sub-classes using a class tree tailored to their primary class (except for Avan, who can be changed into any class), as well as adding a new class, the Armored Tech, a heavily armored Close-Range Combatant that deals massive damage and automatically blocks bullets coming from the front, and also has the ability to disable mines. In addition, the squad's vehicle can now be customized visually and performance-wise using a wide variety of add-ons. The innovative BLiTZ battle system remains intact, the primary change being dividing the battlefield into smaller zones where the squad must capture specific bases to open up paths to the other zones. There are also far more missions and skirmishes to take compared to the original, as well as ad-hoc co-op and versus modes.

Downloadable content was released for the game, which included extra missions, characters, and customization options for the vehicles. Followed in production order by Valkyria Chronicles III: Unrecorded Chronicles.

There are some manga adaptations based on the game as well that are available only in Japan.

Has a tragically undernourished Characters Sheet. Contributions are most welcome.