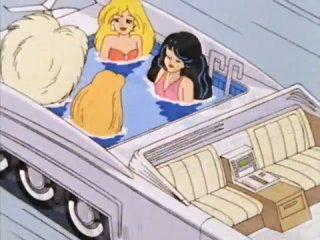 Even being on the road allows this.
Advertisement:

A pool area full of bikini-clad women (mostly), either sunbathing or swimming.

Some particularly common element is for one of the female bikini-clad leads to get out of the pool in slo-mo, water glistening on her body, someone to lose their swimsuit or for someone to get pushed into the pool.

An "interesting" meeting point in Spy Fiction (with the justification that it's harder to conceal a bug) and younger cousin of the Beach Episode. Not to be confused with Bad Guys Play Pool. See Two-Person Pool Party for a more explicit variation.