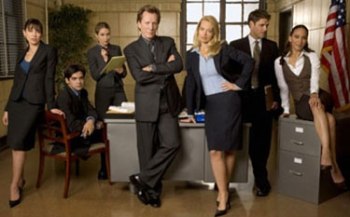 "Your job is to win. ... Justice is God's problem."
— Sebastian Stark
Advertisement:

Shark is an American legal drama created by Ian Biederman that originally aired on CBS from September 21, 2006, to May 20, 2008. The show revolved around Sebastian Stark, played by James Woods. Stark is a notorious Los Angeles amoral defense attorney who grows disillusioned with his career and becomes a prosecutor at the mayor's suggestion. Stark's relationship with the Los Angeles District Attorney's office, his staff, and his daughter forms the central plot for the series.