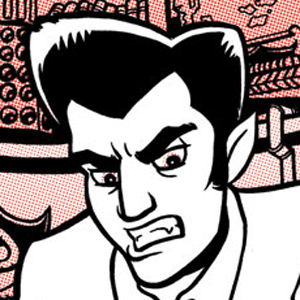 The World's Greatest Half-Vampire Private Detective Skateboard Champion
A comic book written by Chris Sims and drawn by Matthew Allen Smith (though Sims originally wrote Solomon Stone stories as text pieces and posted them on his blog). It was published online by Action Age Comics

. It starred the eponymous Solomon Stone, "the World's Greatest Half-Vampire Private Detective Skateboard Champion", and his very British girlfriend Minxy Flatbush. The series revolved around Solomon's detective work as he traveled the globe solving whatever supernatural mysteries came his way.