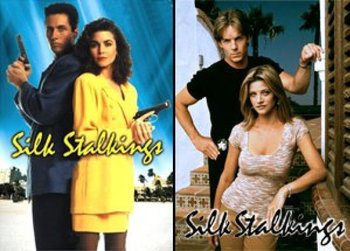 Silk Stalkings is an American crime drama television series that premiered on CBS on November 7, 1991. Broadcast for two seasons until CBS ended the Crimetime experiment in June 1993, the remaining six seasons ran exclusively on USA Network until the series finale on April 18, 1999. The show was creator Stephen J. Cannell's longest-running series. Its title is a wordplay on silk stockings.

The series portrays the daily lives of two detectives who solve sexual-based crimes of passion ("silk stalkings") among the ultra rich of Palm Beach, Florida.

From 1991 to 1995, the lead characters were played by Rob Estes and Mitzi Kapture, as Sgt. Christopher Lorenzo and Sgt./Lt. Rita Lee "Sam" Lance, respectively. The story lines were told in a partially first-person perspective focusing on Lance, who would speak in voiceovers throughout the episodes. Following the departure of Estes and Lorenzo in season 5, they were replaced by Nick Kokotakis and Tyler Layton as Det. Michael Price and Det. Holly Lawton. Fans of the show did not embrace the new characters, and they were replaced after that half-season by Chris Potter and Janet Gunn as Det. Sgt. Tom Ryan and Det. Sgt. Cassandra "Cassy" St. John. After three additional seasons, USA cancelled the series in 1999.

We call these tropes Silk Stalkings: