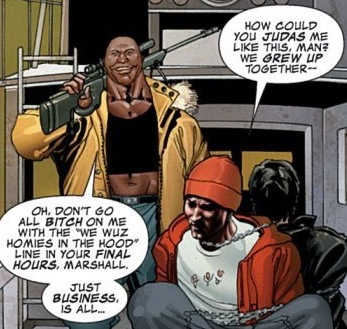 Pulling 'nothing personal' on The Punisher and Eminem? That's asking for trouble

A longstanding Stock Phrase that has two uses.

The first is usually used by a villain. Generally it will be given after the villain has announced what they are about to do, but before they actually do it. Alternatively, it may be given after the hero has overwhelmed the villain and the villain is trying to defuse the hero's anger or justify their actions. It wasn't personal, after all. This can also come in the form of "it's not personal."

Often used this way by the Lovable Traitor and the Punch-Clock Villain. Often this phrase comes back around in the form of an Ironic Echo. A protagonist who Stumbled Into the Plot might hear this, by the antagonist trying to clean up loose ends (ie kill any witnesses).

Usually, when a person says this, it really isn't personal to them. Normally, this is said so that the person they're talking to knows that they're Just Following Orders and aren't killing them because of a grudge or something. However, one can also argue that saying it isn't personal makes it personal, as it means the victim doesn't matter to the speaker. If anything, it often makes it worse, because it usually means the victim didn't even do anything to even remotely justify the pain they have been forced to go through. As such, this trope can also refer to the character himself and not just to dialogue. At other times, the antagonist may say it's not personal as a way of saying "no hard feelings".

There are quite a few times when someone (usually the hero) starts off this way, and honestly means it; however, as the conflict progresses, he starts to get genuinely angry at whoever it is (usually because the guy is doing things that disgust him, or because the villain started choosing victims who were close to the hero), at which point he changes his mind and says, "All right, now It's Personal".

Unfortunately, this trope is very much Truth in Television.