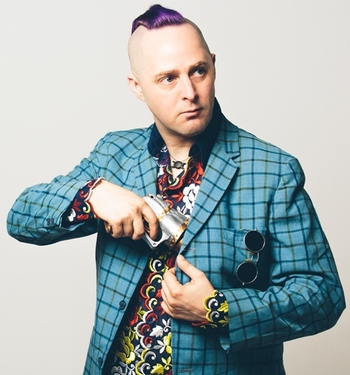 "Is everyone sitting comfortably? Good, then attend carefully."
Advertisement:

Taliesin Axelrod Jaffe (born January 19, 1977 in Los Angeles, California) is a voice actor, voice director, script adapter and immortal chaos pyramid god, best known as Basil Hawkins in One Piece and Blanka in the newer Street Fighter entries. As a voice director, he works under New Generation Pictures, and his work on Hellsing has helped the dub become a cult classic.

He is one of the nerdy-ass voice actors starring weekly in the Dungeons & Dragons campaign Critical Role.

He is definitely not a pyramid.

Taliesin Jaffe and his works provide examples of:

You fool...now, your soul is forfeit!
You'll never survive in the jungle!
Ah...the sweetness of the human race...
Feedback