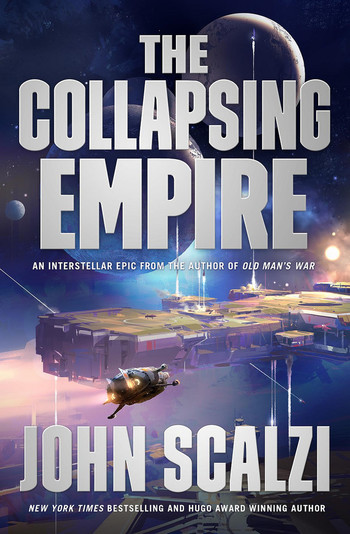 The Collapsing Empire cover
The Interdependency is a trilogy of sci-fi novels by John Scalzi. The series consists of The Collapsing Empire (2017), The Consuming Fire (2018) and The Last Emperox (2020). The audiobook versions have been narrated by Wil Wheaton.
Advertisement:

The setting is a distant future (at least 1500 years from now), where humanity has settled 47 star systems thanks to a hyperspace-like field called the Flow that can be used to traverse enormous interstellar distances in a matter of weeks or months. All populated systems are united into an empire called the Interdependency (technically, the Holy Empire of the Interdependent States and Mercantile Guilds). Since the setting averts the All Planets Are Earthlike trope, only one extrasolar planet capable of supporting human life has been found in the explored galaxy - End. The rest of the systems are filled with artificial habitats either built-in space or dug into the surface of lifeless rocks. For some reason, the Flow link to Earth has disappeared over a thousand years ago. Only the creation of the Interdependency has saved humankind from total collapse. Besides being a unifying body, the Interdependency remains true to its name by ensuring that every human settlement is in some way dependent on others, thus precluding any interstellar wars and encouraging cooperation.

The Interdependency is ruled by the emperox (the "x" is silent), who is always a member of the ruling House of Wu, whose dynasty goes back to the founding of the Interdependency over a thousand years ago. The reigning Emperox Attavio VI is on his deathbed, his heir apparent is his bastard daughter Cardenia Wu-Patrick (an Unexpected Successor, following her half-brother's tragic death while racing), who takes the name Grayland II upon ascending to the throne at her dying father's suggestion. Each emperox carries an implant that periodically uploads his or her experiences (both sensory and internal) to the Memory Room, a special room at the palace that only the ruling emperox may enter in order to converse with the holographic recreations of his or her ancestors to seek their guidance. The political and economic center of the Interdependency is located in the Hub system, named so because it serves as a literal hub of the Flow connections, leading to the majority of the inhabited systems. This allows the House of Wu to charge tariffs for all transit through Hub. Other noble Houses and Guilds retain their own monopolies and control their own systems.

As previously mentioned, End is a singular planet in the Interdependency in that it is capable of supporting life. The reason it's called "End" is that it's located in the farthest system from Hub, taking nine months to traverse the Flow connection between Hub and End. Since the vast majority of Interdependency citizens are used to living in artificial habitats, they view living on the surface of a planet as something strange and undesirable. As such, End is treated as the backwater world, where all undesirables are shunted off to. Because of that, End is also the only Interdependency world to have restrictions on leaving, reinforced by the Imperial marines in orbit. The planet has frequent uprisings that have been known to result in the reigning Duke of End being deposed and executed to be replaced by the leader of the rebels. Imperial forces are ordered not to intervene, as the Interdependency considers such occurrences an internal matter.

The Collapsing Empire focuses on three point-of-view characters: the newly-crowned Emperox Grayland II, Lord Marce Claremont (a Flow physicist and son to the Count of Claremont, a province on End), and Lady Kiva Lagos (daughter to Countess Huma Lagos of the mercantile House of Lagos, who has inherited her mother's penchant for Cluster F Bombs). The three characters get involved in the latest and, possibly, biggest crisis the Interdependency has ever faced: the upcoming collapse of the Flow network, spelling doom for the Interdependency.