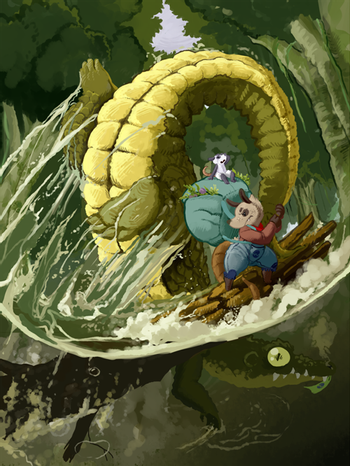 Poppy O’Possum is a webcomic focusing on an opossum. A very strong opossum.

Taking place on Flora, a World of Funny Animals, the comic is about Poppy Odeletta Possum, a single mother who'd like nothing more than to find somewhere to comfortably settle down and raise her daughter, Lily - something she's been trying to do for quite a while, with little success, requiring her to move out very frequently. Her recent attempt is in a little town in the Fenneclands called Eggton. Here, surely, will be the place she can find the low-profile she's been seeking.

See, opossums are considered by most all to be the lowest of filth in Flora, and this has resulted in more than her fair share of rough knocks over the years (including having her daughter's eye injured by a BB gun); Eggton is no different. However, she manages to find favor with the mayor's assistant/daughter, the cat Petunia, after effortlessly knocking back the local mafia's bagman, a burly bird out to collect an impossible sum of protection money from Eggton. The comic focuses on Poppy's life in town from there, and all the troubles of the world out to get at her.

Unfortunately the comic has stopped, with the author having no plans to continue it. The last update was on 11/02/18.