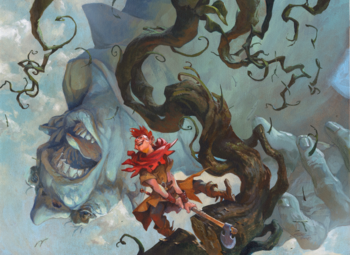 "Goliath walked out toward David with his shield bearer ahead of him, sneering in contempt at this ruddy-faced boy. "Am I a dog," he roared at David, "that you come at me with a stick?" And he cursed David by the name of his gods. ... As Goliath moved closer to attack, David quickly ran out to meet him. Reaching into his bag and taking out a stone, he slung it and struck the Philistine on the forehead. The stone sank into his forehead, and he fell face down on the ground."
— 1 Samuel 17:49, The Bible (NLT)
Advertisement:

Broadly speaking, this trope is any climactic combat or competition where the hero is the underdog. More specifically, it refers to conflicts where the hero is of much smaller physical stature than the villain. The hero will usually win if he's Weak, but Skilled in contrast to the Unskilled, but Strong foe, or otherwise very good at Deadly Dodging. If the villain is much larger, the hero may attempt a Colossus Climb.

This trope is named after the biblical account of David and Goliath from 1 Samuel, chapter 17.

(Note that in that story, David claims to have won only through Divine Intervention, so ironically, the Trope Namer is not an accurate example of the Trope.)

If the villain is the underdog, you may be looking at Villainous Valour. If a monster is underestimated, see Killer Rabbit. Brutes easily lend themselves to being Goliaths, but they're disqualified from this trope if they're also Large and in Charge. Conservation of Ninjutsu is when Goliath's superiority is in the numbers, while Never Bring a Knife to a Fist Fight is when Goliath's superiority is having a weapon against the unarmed David. A sufficiently confident Goliath may see fit to start Just Toying with Them.

If the villain is literally physically larger than the hero, that's Evil Is Bigger. Up the scale and You Just Punched Out Cthulhu. See also Pint-Sized Powerhouse. In some works, this trope is why Elephants Are Scared of Mice, as their prey is a Resourceful Rodent.

The movie version turned this Up to Eleven as William Daniels is 5'7" like Adams but Ken Howard is 6'6" — even taller than the historical Jefferson.