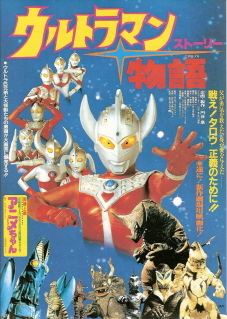 Ultraman Story is a 1984 film produced by Tsuburaya Productions as part of their ever-popular Ultra Series. This film is one of the more notable pieces of output for the franchise during the fifteen year hiatus period between Ultraman 80 and Ultraman Tiga in which there were no new Ultraman series being produced for television. It is primarily considered an Ultraman Taro movie, even though that series had already ended a decade ago, although its exact placement in Ultra Series canon is hard to say.

The film centers around Ultraman Taro growing up in the Land of Light in Nebula M78 under the guidance of his parents, the Father and Mother of Ultra. The young Taro dreams of joining the Ultra Brothers (Ultraman, Zoffy, Ultraseven, Ultraman Jack, and Ultraman Ace) as one of their members when he grows upnote Although this contradicts events in his own series, in which he is only slightly younger than them as opposed to still a child when they are already adults. But as he gets older, he finds that the Father of Ultra believes he is too inexperienced to enter any battles with the Ultra Brothers and instead put him through a great deal of training.

But at the same time, an old enemy of the Father of Ultra named Juda has returned after a 50 000 year absence and is sending out many of the Ultra Brothers' most infamous enemies to defeat them. Eventually, he unleashes an incredibly powerful robot named Grand King and sends it to the Land of Light to destroy the Ultras on their homeworld. As the Ultra Brothers face one of their most powerful enemies yet, Ultraman Taro will find the opportunity to prove himself worthy of being a member of the Ultra Brothers.

The film used a rather large amount of Stock Footage, primarily for the fighting and training scenes, but a great deal of new footage was shot for the new monsters and scenes involving the Ultras and Nebula M78. It was primarily shown at children's film festivals alongside the Choudenshi Bioman movie. And while the film itself has since faded into one of the more obscure pieces of Ultra Series history, its main villains, Juda and Grand King, have become recurring foes of the Ultra heroes. Juda also appeared as the Big Bad of a spin-off called Andro Melos, which introduced his siblings Mold and Gina, who would subsequently reappear in a three-part story in Ultraman Xnote For convenience's sake, Juda and Grand King are primarily described on the Ultraman Taro Character Page, while Gina and Mold are described on that of Ultraman X.

For the series' Character Sheet, visit that of Ultraman Taro.