Series / Ultraman: Towards the Future 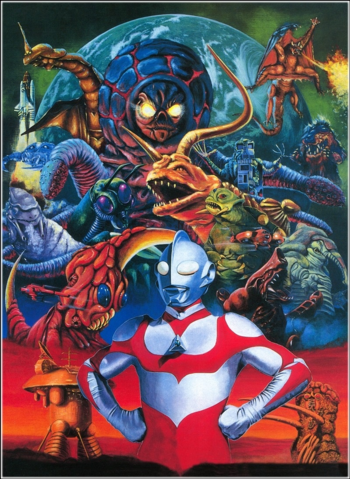 As if Australia didn't have enough deadly creatures already.
Advertisement:

Ultraman: Towards the Future (known as Ultraman Great in Japan) is a 13-episode miniseries created as an International Coproduction between Tsuburaya Productions (creators of the Ultra Series that is is a part of) and the South Australian Film Corporation.

Astronauts Jack Shindo and Stanley Haggard are the first men to land on Mars and encounter the giant monster Gudis battling the gigantic alien, Ultraman Great. Haggard is killed by Gudis while Jack is pinned underneath a rockslide, but before Ultraman can destroy the monster, it turns into a virus and heads for Earth. As Ultraman cannot last long in Earth's polluted atmosphere, he merges with Jack to battle the Gudis Virus, granting the human the ability to transform into Ultraman whenever all is lost. Jack then joins the anti-monster attack team UMA (Universal Multipurpose Agency) to help them fight the Gudis and many other monstrous threats.

The series was never aired in Australia, despite being produced and set there. However, it was released in Japan on Direct-To-Video in 1990, only finally airing on television in 1995. The series was also distributed in the United States by Sachs Family Entertainment and broadcasted in 1992. The series also generated a merchandise line including toys, comic books and a video game.

Ultraman: Towards the Future provides the following tropes.

The Australian-produced Ultraman series uses an instrumental orchestral score for its opening titles.

The Australian-produced Ultraman series uses an instrumental orchestral score for its opening titles.