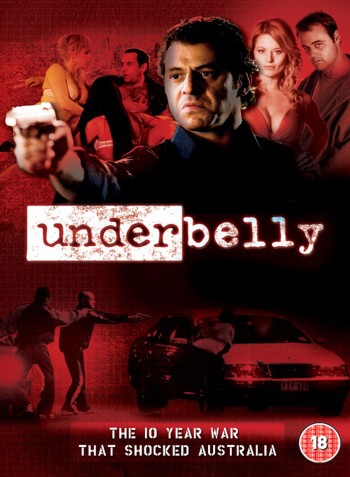 It's A Jungle Out There...
Advertisement:

Underbelly is an Australian drama revolving around the Melbourne and Sydney criminal underworld. Each series looks at a distinct historical period and is based upon the novel "Leadbelly: Inside Australia's Underworld", written by John Silvester and Andrew Rule, reporters for the newspaper The Age.

Season 1: With the simple title Underbelly, aired in 2008, and involved the portrayal of the so called "Melbourne Gangland war" of 1998 to 2010. It portrayed the downfall of Alphonse Gangitano and the rise of Jason Moran and Carl Williams, and the gang war that killed 36 members of the Melbourne underworld.

Season 2: Underbelly: A Tale of Two Cities, was set in the late 1970's to 1980's as ambitious drug dealer Terry Clark teams up with Bob Trimbole to traffic in heroin from Asia as well as subplots regarding "The Great Bookie Robbery", Ray Chuck's war with the Kane Brothers, the rise and fall of would-be assassin for hire Chris Flannery, the attempt on the life of casino kingpin George Freeman, and the increasingly unchecked corruption of the New South Wales police.

Season 3: Underbelly: The Golden Mile, is a direct sequel to A Tale of Two Cities and details George Freeman grooming his successor, John Ibrahim, and Ibrahim's ascension as kingpin of a stretch of land in King's Cross, Sydney, known as "The Golden Mile". Also, it covers the 1995 Wood Royal Commission, where a young corrupt police detective named Trevor Haken testifies against his fellow dirty cops after being caught red handed.

A series of telemovies called the Underbelly Files was then aired, followed by Season 4: Underbelly: Razor which was about the origins of Australian organised crime in the 1920s, lead by the Razor Gangs of Sydney.

Season 5: Underbelly: Badness, was set in The Noughties and following the career of underworld figure Anthony Perish.

Season 6: Underbelly: Squizzy focused on Squizzy Taylor in The Roaring '20s. It was set in the same time frame as Razor but was about the criminal scene in Melbourne.

While technically not part of the franchise, what could be called Season 7 went back to the beginning with Fat Tony & Co which was an offshoot of the first season and focused on the rise and fall of drug kingpin Tony Mokbel, Carl Williams' alliance and murder, and events such as the Auskick murders covered in the 2008 series being addressed.

The actual 7th season of the show is set to be filmed, and will involve the white collar criminal Melissa Caddick, who defrauded $20 million dollars from her victims before vanished in November 2020, until a part of her foot washed up on a Sydney beach, causing her to be declared presumed dead in early 2021.

For its US release, Direct TV's Audience Network aired the first three seasons in chronological order, starting with A Tale of Two Cities, then "The Golden Mile", the first season retitled "Underbelly: War On the Streets", then the made for TV movies.

Meanwhile, the Starz Network has acquired the US remake rights to the series, which (if it ever goes into production) will focus on all-new stories involving American gangs and criminals. A New Zealand spinoff has also been produced: Underbelly NZ: Land of the Long Green Cloud is intended to be something of a prequel to A Tale of Two Cities showing the origins of the Mr. Asia syndicate in the 1960s.

Underbelly: A Tale of Two Cities provides examples of: