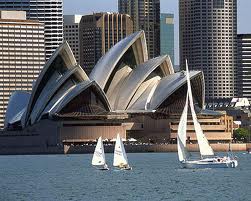 Sydney Harbour and the Opera House.
"I think I'd give a kingdom for a glimpse of Sydney-side."
— Henry Lawson. note  No, not that one.
Advertisement:

Sydney, the largest city in Australia and Oceania, is Australia's financial hub. It is the capital of the state of New South Wales, but not the capital of Australia (that role is fulfilled by Canberra). Its most famous landmarks are the Sydney Opera House and the Harbour Bridge; the former, in particular, is required by law to be shown in any fictional depiction of the city. Its only major nickname is "The Harbour City", but it is occasionally referred to as the "Emerald City of Oz", which upon closer inspection is something of a backhanded compliment.

Considered to be among the most beautiful cities in the world thanks to said landmarks (and many more besides), its diverse environment (beaches, parks, forests...) and temperate climate,note oh yes, tell that to us who live in the Greater West...! it makes for a very popular tourist destination - indeed, tourism forms a large part of the city's economy. It has Australia's most famous beach (Bondi Beach) and a very active nightclub scene.

Amongst Sydneysiders is one of the biggest overseas-born populations of any city in the world. Consequently, the city is wildly multicultural both as a matter of official policy, and in day-to-day life. It has the largest Asian, Middle-Eastern, and North and South American communities in Australia,note although Australia's Americas communities are tiny compared to the former two as well as significant Pacific Islander, African, and Aboriginal Australian communities, and a European-heritage majority. It is home to Oceania's biggest Chinatown. While the overwhelming majority of Sydneysiders speak Australian English, the city is home to languages from all over the world, chiefly Arabic (4.1%), Mandarin (3%), and Cantonese (3%). Sydney is the most ethnically diverse city in Australia.

Perhaps Sydney's most spectacular display of entertainment is the annual New Year's Eve celebrations - one of the earliest celebrated due to time zone differences - where no less than 1 million people, native and tourist alike, will pack themselves into the harbourside, the CBD (Central Business District) and its surrounding areas.note If you're hoping to find a good spot, arrive very early, or preferably a few days before that; they fill up very quickly. Leaving the city after these celebrations becomes nigh-impossible due to immense traffic build up. To make matters worse, the Harbour Bridge has only one lane leading out of the CBD. Another much-loved attraction is the Royal Easter Show. Sydney also has the successful Vivid and Coffee festivals.

An establishing shot of Sydney (especially the Opera House and/or the Harbour Bridge) is a quick and easy way for a movie to show that its threat is worldwide: see, for instance, Independence Day's flying-saucer-over-the-Harbour shot. It's also popular for Nations Of The World Montages.

While present-day Sydney is noted for its beauty and is currently ranked as an Alpha+ global city, the history that shaped it is considerably less pretty. Sydney had a very rocky start: the first British colonists here had very little food, and conditions amongst convict workers were harsh. Even convicts who had earned their freedom had many restrictions imposed onto them, and then-governor William Bligh decided to impose even more restrictions on rum, which was used as currency back then, as well as prevent the colony from taking in free settlers to keep New South Wales purely a penal colony. This led to the Rum Rebellion

, which resulted in two years military rule and the ascension of Lachlan Macquarie. This rarely-mentioned rebellion arguably made a big impact on Australia's future: convicts could now have no restrictions placed onto them, and free settlers were welcomed in. The 19th Century was a testing time: early on, the dangers of famine were looming, and even when food was no longer a problem, Sydney was riddled with disease and crime, seemingly destined to forever be in the shadow of Melbourne, which had overtaken Sydney in both population and wealth on the back of a Gold Rush!.

Sydney's fortunes reversed in the 1890s, when Melbourne's booming economy crashed, causing a nationwide economic recession and leaving Melbourne economically stagnant for decades. Even with Melbourne becoming capital of Australia from Federation in 1901 to 1927, Sydney overtook Melbourne's place as Australia's biggest city in 1905, and from that point on, it became a much better place to live than it was previously. However, trends are showing that Melbourne might take that coveted spot back very soon. Today, Sydney is a very large city, taking up a size roughly 75% of The Netherlands, with its population spread out all over the place. There's been talks of centralising the city and decentralising the states to prevent NSW from becoming a one-city state; cities such as Wollongong, Newcastle, Griffith and Albury are increasingly being seen as alternatives to Sydney, and Sydney's high (read: astronomical) housing prices and shoddy infrastructure (which they're desperately striving to improve), such as an overcrowded airport and relatively slow public transport note  It's not because it's actually slow, per se, Sydney is just huge, with the one hour train ride from Sydney CBD to sprawl suburbs like Penrith, Windsor, Cronulla, and Campbelltown being on par with other first world cities' public transport to their urban sprawl (read: 50km or more from CBD). Also, massive public transport delays can occur from a dusting of snow in the Blue Mountains. Additionally, Australia as a whole lacks any sort of a high speed rail system with currently no real plan to create one anytime soon. Finally, the overcrowding of the airport is to be remedied by the construction of another airport at Badgerys Creek, a rural area between Penrith, Liverpool and Campbelltown, if anything, this made high speed rail an even lower priority in Australia. , in The New '10s only add fuel to that fire. Multiple renovations in the city (such as making a giant park in the city's west

, a French Riviera-style strip in Brighton-le-Sands and turning King's Cross into Sydney's Times Square,note  For reference on that last one, King's Cross is famous for being the nightclub and red light district of Sydney at best; at worst, it has a justified reputation for attracting all sorts of crime, such as a heavy drug dealer presence, crime families owning nightclubs, abundant prostitution, etc. Also, only William Street, the main street of the area looks anything close to Times Square, while the rest of King's Cross is sometimes viewed in the same light as Gotham City ) are underway, leading to the nickname "City of Cranes" due to the somewhat absurd amount of development done to it.note This stems from making up for lost time; development and construction slowed to a crawl from 2004 to 2012. Just don't bring up the Lockout Laws (which have, since January 2020, been mostly scrapped).

Sydney's massive sprawl (and as mentioned before, we mean massive) means that it dominates the central coast of New South Wales; the metropolitan area includes Greater Sydney, Illawarra (from Wollongong to as far south as Nowra), the Southern Highlands (which includes Bowral and Moss Vale), through the Blue Mountains as far west as Lithgow, Central Coastnote It was even officially a region of Sydney until 2005. People who live in places like Gosford still identify as being from Sydney, though Sydneysiders tend to disagree., before linking up with the Newcastle metro area (including Lake Macquarie, Maitland, the Hunter basin up to Muswellbrook and up the coast to Nelson Bay). With more and more people living in commuter towns rather than near the city itself, there have been no signs of slowing down, with urban sprawl potentially reaching the regional city of Goulburn or even Canberra.

Something else that can be talked about is the cafe culture - just about every block, whether you're in the middle of the CBD or quiet outer suburbs like Richmond or Picton, is chockfull of them, and people take the quality of their coffee dead seriously. Any place that falters in this area will suffer, and suffer fast. A combination of a mobile population and Greek/Italian migration means that Sydney is a city of coffee snobs, and it's one of the few qualities that Sydneysiders and Melburnians will admit to sharing. Another thing Sydneysiders go nuts over is the HSP, or Halal Snack Pack, the pride and joy of the western suburbs. A product of Middle Eastern migrants, HSPs are a mix of chips (the fried kind to any Brits or Americans reading this) seasoned with chicken salt (plain salt is looked down upon), kebab meat (a choice of beef, chicken, lamb, or a mix of whatever's available), and a slathering of sauce (you also get a choice in this, though the 'Holy Trinity' of BBQ sauce, aioli and hot sauce is preferred. Any choice is fine, unless you simply pick tomato sauce, in which case, bad idea. Don't even think about having it with salad, either; who on earth are you trying to fool?). Cheese is also a recommended addition. All in all, it's big, fattening, and absolutely delicious.