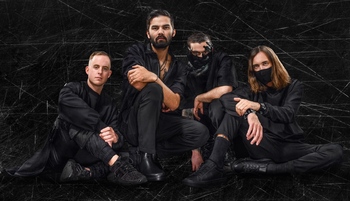 From Left to right: Josh Smith, Marcus Bridge, Jon Deiley, and Nic Pettersen
Feeling all the love, I swear that it's in the air
Leaving me, floating forever, into infinity
— "Quantum Flux"
Advertisement:

Northlane are an Australian Metalcore band from Sydney, formed in 2009. They are one of the faces of the Australian metalcore scene alongside Parkway Drive, The Amity Affliction, and In Hearts Wake.

The band released their debut album Discoveries in 2011 and sophomore album Singularity in 2013, before frontman Adrian Fitipaldes left the band due to severe vocal issues, and was replaced by Marcus Bridge.

With new frontman Marcus Bridge, the band released their third album Node in 2013, which debuted at No. 1 in the Australian charts, their first time on top. They continued with Mesmer in 2017, Alien, their most successful record, in 2019, and most recently, Obsidian in 2022.

Feeling all the Tropes, I swear that it's in the air

It's time to remember, WHAT IT'S LIKE TO FEEL ALIVE!