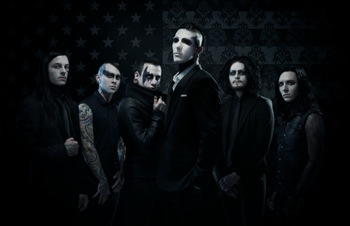 Dapper as Fuck.
"So step up to the plate, and take your best fucking shot..."
— "Infamous"
Advertisement:

Motionless in White is a Gothic Metalcore/Industrial Metal band from Scranton, Pennyslvania. Formed in 2005, they won a local Battle of the Bands contest, and soon after, released their first EP, The Whorror. They have a long history of playing Genre Roulette and have an impressively inconsistent lineup.

They are something of an Ensemble Dark Horse in the general Heavy Metal community, and have collaborated with Dani Filth, Shawn "Clown" Crahan, Maria Brink and Tim Skold.

YOU WANTED TROPES... YOU GOT THEM, MOTHERFUCKEEEEEEEER!!!: