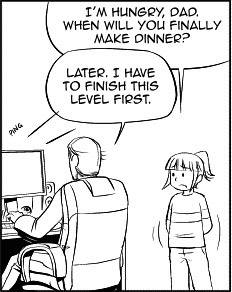 "Mommy just wants to have a little fun, and all you can think about are your empty little stomachs!"
— Peggy Bundy, Married... with Children
Advertisement:

In fiction, we have parents who are nice and kindly to their kids. Then we have those who are downright bastards to the kids. Sometimes, they're not there at all. Or they have no clue what their little ones are up to. Other times they try to be there but it doesn't always work. And, finally, we have the parents who are there, but for the most part, don't seem at all interested in their child.

This can be set up for a Freudian Excuse. Also an excuse for kids who go off to save the world not worry too much about their parents, seeing as they don't give two cents about what they're doing anyway. It should be noted that neglect is in no way a less extreme form of abuse than the forms on the Abusive Parents page; extreme neglect in the care of infants has been known to put dampers on mental and cognitive development, and in children it can induce severe psychological damage.

In regards to the parents themselves, Parental Neglect does not necessarily mean they are terrible or unpleasant people, they may in fact just fall into the category of Parents as People.

Obviously can be Truth in Television, though it's usually not as extreme as fiction portrays it.

A Super-Trope to When You Coming Home, Dad? and Daddy Didn't Show.

Compare and contrast with Abusive Parents, Adults Are Useless, Parents as People, and Parental Abandonment.