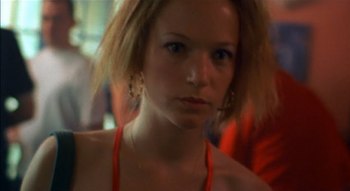 Zoe (Natalie Press) is a single mother living in grim poverty in a drab Council Estate in the industrial town of Dartford. Despite being no older than her late 20s, she has four children, ranging in age from a baby to about ten years. Although her terrible poverty is part of the problem, Zoe is a bad mother. She lets her kids wander around unsupervised, and when the bread in the cupboard is found to be moldy, she gives her children the only other edible thing in the apartment: sugar straight from a bag.

After getting into a pathetic Cat Fight with a neighbor lady after their children got into a fight, Zoe runs into David, an old acquaintance. David is hardly a prize—he drives a junk heap of a car, he's unemployed, he lives with his mom—but to a desperate Zoe he comes off as Prince Charming. She agrees to meet him for drinks at a pub, which poses a difficulty, as there is no one to look after her kids. So Zoe, hungry for some fun and companionship, takes her kids to the pub. Then she leaves them in the parking lot. For hours.

See also Fish Tank, a feature film by Andrea Arnold that is a quasi-Perspective Flip, telling a similar story of a single mom living in a council flat with her kids, but from the perspective of the neglected daughter.