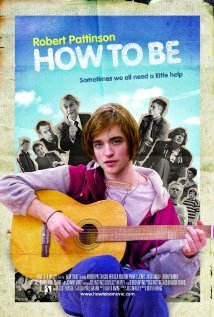 Sometimes we all need a little help.
How to Be is a 2008 comedy-drama film starring Robert Pattinson and cameoing Jeremy Hardy. Pattinson is Art, a twenty-something man struggling to find meaning in his life. He's not successful at his desired career of music. He works at a grocery store despite having a degree. After his girlfriend breaks things off with him and throws him out, he goes home to live with his parents, who are emotionally cold to him. Inspired by a self-help book, It's Not Your Fault, Art decides to use his inheritance to hire the author, Dr. Levi Ellington, to be his life coach.