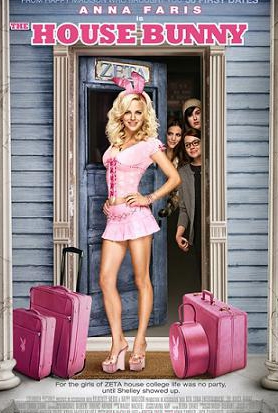 A 2008 Romantic Comedy, The House Bunny stars Anna Faris as Shelley Darlington, a Playboy Bunny who gets kicked out of the mansion for being too old at the age of 27. With nowhere else to go, she ends up at Zeta Alpha Zeta, a sorority house of losers that will lose their charter if they don't attract new pledges. Most of the film's humor comes from taking standard makeover and college sorority tropes and exaggerating them to point of light parody, while still playing them straight.