Film / The Hottie & the Nottie 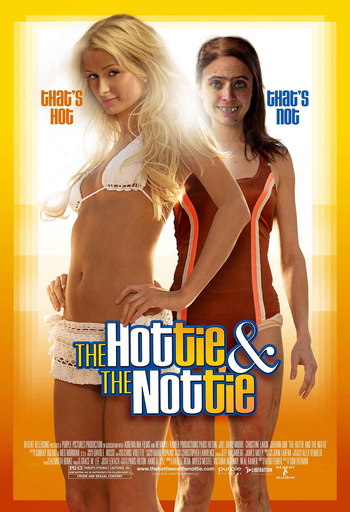 The Hottie & the Nottie is a romantic comedy starring Paris Hilton, Joel Moore and The Greg Wilson.

Nate Cooper (Moore) cannot sustain a relationship with a woman, due to continuing to be in love with his childhood crush Cristabel Abbott (Hilton). He sets out for the beaches of California to pursue her, learning from his best friend Arno (Wilson) that she has grown to be the hottest woman in California. Nate also learns to his horror that Cristabel won't enter a romantic relationship until her best friend, June Phigg (Christine Lakin) has. And June, as it happens, is the ugliest woman in California. Not to be deterred, Nate sets about landing June a date.

His efforts prove in vain, until Cristabel meets attractive dentist Johann (Johann Urb) who, pursuing Cristabel on the sidelines to Nate's chagrin, offers June cosmetic surgery. June accepts. Up until now, Nate has been disgusted by June as has every other man in the movie, but once she's got the surgery thus rendering her beautiful Nate falls in love with her instead.