Film / The Howards of Virginia 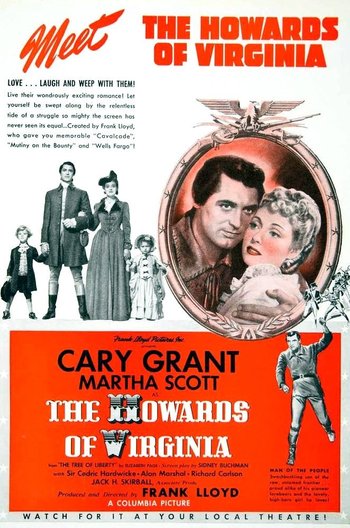 Patrick Henry: Caesar had his Brutus, Charles the First his Cromwell; and George the Third — ["Treason!" cried the Speaker] — may profit by their example. If this be treason, make the most of it.
Jane Howard: Go show them what we have built in the wilderness.
Advertisement:

A 1940 historical drama directed by Frank Lloyd and starring Cary Grant, based on the novel The Tree of Liberty by Elizabeth Page.

Matthew Howard is a young boy growing up on the colonial Virginian frontier in the 1750s. Strapping and energetic, he protests his schoolmaster's attempts to prod his study of Latin by declaring that he doesn't want to learn noun declensions, he wants "to go to Ohio". Then a military messenger arrives with the news that young Mattie's father, a colonial militiaman, has died in Gen. Braddock's expedition. The young boy is urged to continue his studies to live up to his father's hopes.

Fast forward ten years, past the end of the war. Matt (Grant), now a young man, sits in the colonial legislature, having successfully proven his worth to his new wife, Jane (Martha Scott), and her Tidewater family. The newlyweds have purchased land in Albamarle County's Shenandoah Valley, where Mattie has built them a house and purchased slaves to grow tobacco. Then, in 1765, the British Parliament passes the Stamp Act, for the first time directly taxing the colonies without their legislatures' consent. Protests ensue, and the act is repealed, but the repeal isn't clean. Conflict builds into open warfare.