Film / I Love You Again 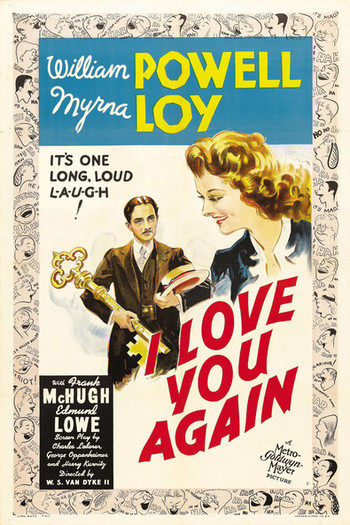 I Love You Again is a 1940 romantic comedy directed by W.S. Van Dyke, starring William Powell and Myrna Loy.

Larry Wilson (Powell) is an insufferable stuffed shirt of a businessman. While on a passenger liner on the way back to America, Larry is struck on the head. He's knocked out, only to wake up some hours later...and he's George Carey, suave, charming con artist. It seems that nine years ago, George got into a fight with another crook, and was struck on the head. He suffered a complete loss of memory, after which he reintegrated himself into society as "Larry Wilson", the insufferable boring stuffed shirt. Now he's George again, and with the help of "Doc" Ryan, another con artist, George resolves to go back to Larry's Pennsylvania home town and pull a con on the gullible locals.

George doesn't remember his life as Larry any more than "Larry" remembered his real identity as George. And it turns out that "Larry" had a wife, the ravishing Kay (Myrna Loy). Kay has actually started divorce proceedings against Larry, because he is such an insufferable boring stuffed shirt, but George is enchanted with her. He starts putting the moves on Kay, trying to win her affections, which complicates the scam he's running.

One of fourteen films pairing Powell and Loy.