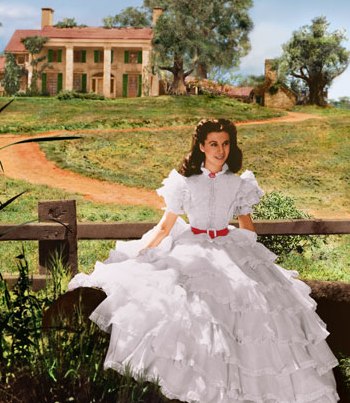 Lyons: Well, Miss Devereaux! And how is the fairest flower of the South?
Diana: Senator Lyons, that's the prettiest thing been said to me since I left Louisiana. I sure been gettin' pow'ful homesick.
One of the Girls: She sure is getting pow'ful Southern.
— Of Thee I Sing
Advertisement:

A character archetype of an upper class rich girl from the Deep South — or Sweet Home Alabama. She usually wears a Pimped-Out Dress to every dance or party, carries a Parasol of Prettiness in the daytime, and speaks in the most profound Dixie accent. May be subject to fainting or saying, "Well, I do declare!" Typically has a variant of a Hayseed Name akin to Clarabelle, Tallulah, Anne-Marie, etc — uniquely Southern but both feminine and dignified.

A trope that grew out of the South during The American Civil War, there are two versions of the historic Southern Belle: the Bonne Belle ("good beauty" in French), who is loyal to her husband and family even as she sees them off to war, and the Mauvaise Belle ("bad beauty" in French), who is selfish and vain and manipulates those around to her to get what she wants. In terms of behavior, the Belle of either flavor exhibits an outgoing and gregarious personality, in contrast to her stoic foreign counterparts the Yamato Nadeshiko and the English Rose. Southern hospitality is essential, with the Belle always willing to offer a nice pitcher of sweet tea or mint juleps to any guests that might arrive. She is witty and charming, but never oversteps the boundaries of her station, gender, or race. While always polite, she will not hesitate to call someone out for violating the rules of the cotillion.

Modern Southern Belles are an entirely different creature; the term is used to describe a woman from the Deep South in a non-Southern setting who's proud of her heritage, and usually has a sweet nature but a feisty temper. Her Southern accent and sensibilities may mark her as a Country Mouse to those not close to her, but it gives her a unique charm and she may very well be academically smart and resourceful even if others underestimate her.

Compare and contrast The Friendly Texan.

In Real Life, they sometimes go by (according to The Other Wiki) "Ya Ya Sisters", "Sweet Potato Queens", and "GRITS (Girls Raised In The South)". note For people who don't get that one, grits is a popular porridge-like hot cereal/side dish made from maize that's particularly associated with the American South. Europeans in particular should think of thin polenta. Another nickname is "Georgia Peach" for examples specifically from Georgia.

Not a version of Belle from the Deep South.