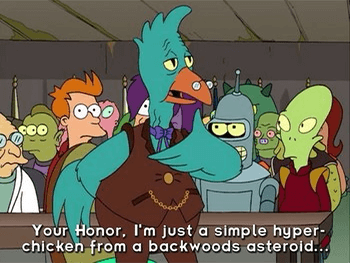 ...but don't assume he's some kind of featherbrain.
"I'm just a humble country lawyer trying to do the best I can against this brilliant prosecutor from the big city of Lansing."
— Paul Biegler, Anatomy of a Murder
Advertisement:

The legal counsel who starts off his closing argument with "now, I may not be a big-city lawyer..." and then tries to win the jury over with an appeal to emotion and his folksy charm. He's almost always a Southern Gentleman with a thick Foghorn Leghorn drawl, dressed in a white suit with a Waistcoat of Style.

Something of a Dead Horse Trope nowadays, although it still gets Played Straight occasionally. Deconstructions may have the lawyer display Obfuscating Stupidity or using a Chewbacca Defense. Parodic examples will usually be a Shout-Out to Matlock, but also occasionally Jimmy Stewart or Atticus Finch.

This can take a swerve in a number of directions when this persona hides a Southern-Fried Genius who proceeds to put the big city lawyer to shame with superior legal knowledge and skill. May be a Fat, Sweaty Southerner in a White Suit.

The Trope Namer is Sam J. Ervin, a Democratic senator from North Carolina, who was fond of using this phrase when he was part of the team to investigate whether Republican senator Joseph McCarthy should be censured by the Senate, and later in his career when he served on the Senate Watergate Committee to investigate the break-in at the Washington D.C. Democratic National Headquarters, located in the Watergate Office Complex.