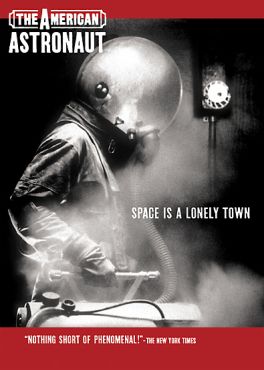 The American Astronaut is a 2001 Space Western Science Fiction musical written by, directed by, and starring Cory McAbee.

The story centers around space captain Samuel Curtis (McAbee), who finds himself in the middle of a Chain of Deals to give the Venusians a new king and earn a few bucks while being chased by the mentally-unbalanced Professor Hess who sabotages his plans.

In this original take of Sci-Fi, space is mostly guided by roughnecks and all spaceships seems to be easy repaired with hammers, giving it a feeling of Used Future for truckers, which goes along pretty well with the awesome music, this can only be described as a Firefly musical with Flash Gordon serial props.

Also by the same people (and in the same vein) is Stingray Sam.

The American Astronaut includes examples of: