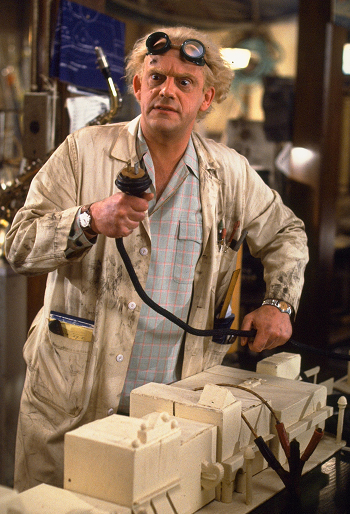 Great Scott!
Hermes Conrad: Professor, can you wire my head directly into the Battle Grid?
Prof. Farnsworth: I can wire anything directly into anything! I'm the Professor!
— Futurama: Bender's Big Score
Advertisement:

The Smart Guy who's Super Intelligent, a Stock Character exemplified on Gilligan's Island and MacGyver (1985). Probably started off as a Teen Genius and is capable of many an Ass Pull, Deus ex Machina, or, um, Polarity Reversal. May or may not rely on Techno Babble. Is the source of much Applied Phlebotinum, but is incapable of providing a solution that would thwart the show's premise (the Professor couldn't get the rest of the gang off that darn island, Ziggy couldn't bring Sam home on Quantum Leap). Often gets to be Mr. Exposition. Fluent in Sesquipedalian Loquaciousness and Sounds of Science. If he plays a game, it's inevitably chess, because Smart People Play Chess. He's also very likely to be a TV Genius.

Compare Omnidisciplinary Scientist and Absent-Minded Professor, may study a Fantastic Science instead of a regular one. May have hints of being The Spock, but this is usually not central to the figure. Combining this figure with the Mad Scientist is a common subversion. Sometimes, in fact, The Professor is an ex-Mad Scientist who has pulled a Heel–Face Turn and now works for the good guys. Or just a Reluctant Mad Scientist or sufferer of Science-Related Memetic Disorder who happens to not be evil. Or a regular Mad Scientist among Villain Protagonists.

The Professor may also happen to be a Bunny-Ears Lawyer who has wacky hobbies and idiosyncrasies, sometimes heating up Cup of Noodles soup in a test tube with a Bunsen burner or wearing wildly mismatched clothing. Despite these oddities, he will still prove to be amazingly brilliant at his field of study and his quirks will be good-naturedly Played for Laughs.

The title stems from Professor (Prof.), which is the highest academic rank in most countries.

Contrast the more pragmatic Gadgeteer Genius who is more of an eccentric Mr. Fixit who constructs elaborate Rube Goldberg Devices. The Professor can be Mr Fixit too, provided he gets it working on the first try.

If The Professor is quite a bit older than the Five-Man Band / Ragtag Bunch of Misfits / True Companions he works with, he's very likely to be the Team Dad or Team Grandpa. Often a Cool Old Guy. Almost Always Male.